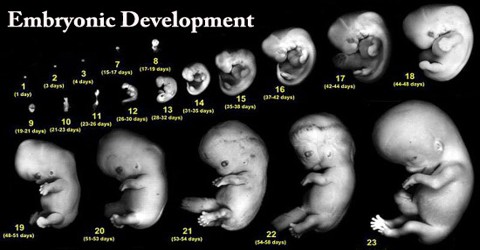 An “embryo” is a person or animal that is still growing in the womb or egg, and embryonic means “like an embryo.” The embryonic stage lasts through the first eight weeks of pregnancy. In humans, other placental mammals, and other viviparous animals, young born as embryos cannot thrive. In marsupials, the young are born during the embryonic stage and complete their development outside the uterus, attached to a teat within the mother’s pouch. An embryo is a stage directly after fertilization that signifies the early stages of growth and development of an organism. In humans, this stage ends during the third month of pregnancy, and is then called a fetus. Plants and invertebrate as well as vertebrate animals have an embryonic stage of development. After fertilization takes place, cell division begins and progresses at a rapid rate. At approximately 4 weeks the cell mass becomes a recognizable embryo from 7 to 10 mm long with rudimentary organs. The beginnings of the eyes, ears, and extremities can be seen. By the end of the second month the embryo has grown to a length of 2 to 2.5 cm, and the head is the most prominent part because of the rapid development of the brain; the sex can be distinguished at this stage.

Embryonic Development (embryogenesis) is the series of changes an embryo undergoes, prenatal development, as it grows toward a mature organism. Generally, in humans this stage of embryonic development is from conception, when the egg is fertilized by a sperm up to about eight weeks, where the baby is then called a fetus. Early in development, a group of cells called the inner cell mass (ICM) forms. These cells are able to produce all the tissues of the body. Later in development, during gastrulation, the three germ layers form, and most cells become more restricted in the types of cells that they can produce. We all know that a human baby grows inside of the mother’s uterus for a period of time – about 9 months – and that it has years of development ahead of it following birth. There are three general phases of gestation. The germinal stage is the period of gestation from fertilization or conception, when the egg meets the sperm, to implantation of the embryo in the uterus. The embryonic stage of gestation is the period after implantation, during which all of the major organs and structures within the growing mammal are formed. Once the embryo is fully formed, it expands, grows, and continues to develop in what is known as the fetal development stage. This is when the mother becomes physically enlarged and visibly pregnant! The fetal development stage concludes at birth.

Around the time of implantation, the embryo becomes divided into germ layers. A germ layer is a collection of cells that determine which cells within the embryo will eventually develop into particular organs and tissues.

Modern developmental biology is extensively probing the molecular basis for every type of organogenesis, including angiogenesis, formation of new blood vessels from pre-existing ones, chondrogenesis (cartilage), myogenesis (muscle), osteogenesis (bone), and many others. Some embryos do not survive to the next stage of development. When this happens naturally, it is called spontaneous abortion or miscarriage. There are many reasons why this may occur. The most common natural cause of miscarriage is chromosomal abnormality in animals or genetic load in plants.

In species which produce multiple embryos at the same time, miscarriage or abortion of some embryos can provide the remaining embryos with a greater share of maternal resources. This can also disturb the pregnancy, causing harm to the second embryo. Genetic strains which miscarry their embryos are the source of commercial seedless fruits.

Abortion is the process of artificially (non-naturally) removing the embryo through deliberate pharmaceutical or surgical methods.