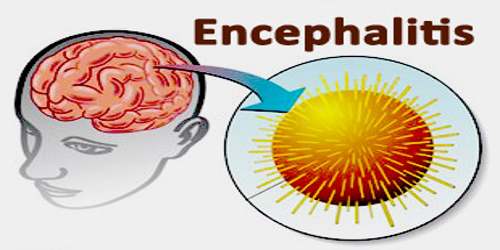 Encephalitis is an inflammation of the brain tissue. It is different from meningitis, which is defined as inflammation of the layers of tissue, or membranes, covering the brain. The most common cause is viral infections. In rare cases it can be caused by bacteria or even fungi. Symptoms may include headache, fever, confusion, a stiff neck, and vomiting. Complications may include seizures, hallucinations, trouble speaking, memory problems, and problems with hearing. Risk factors include a weak immune system. Diagnosis is typically based on symptoms and supported by blood tests, medical imaging, and analysis of cerebrospinal fluid.

Encephalitis usually runs a short course, with full recovery within a week, but can cause brain damage and death. Treatment of encephalitis must begin as early as possible to avoid potentially serious and lifelong effects. Depending on the cause of the inflammation, treatment may include use of antibiotics, antiviral medications, and anti-inflammatory drugs. If brain damage results from encephalitis, therapy such as physical therapy or cognitive restoration therapy may help patients regain lost functions.

There are two main types of encephalitis:

The exact cause of encephalitis is often unknown. But when a cause is known, the most common is a viral infection. Bacterial infections and noninfectious inflammatory conditions also can cause encephalitis.

Common Viral Causes: Viral encephalitis can occur either as a direct effect of an acute infection, or as one of the sequelae of a latent infection. The most common causes of acute viral encephalitis are rabies virus, HSV infection, poliovirus, and measles virus.

Other common viruses that can cause encephalitis include: The symptoms of encephalitis can range from mild to severe.

Diagnosis, Treatments and Prevention of Encephalitis Diagnosing encephalitis is done via a variety of tests:

Anti-viral medications can help treat herpes encephalitis. However, they aren’t effective in treating other forms of encephalitis. Instead, treatment often focuses on relieving symptoms. These treatments may include: The best way to prevent viral encephalitis is to take precautions to avoid exposure to viruses that can cause the disease. Try to:

Practice good hygiene. Wash hands frequently and thoroughly with soap and water, particularly after using the toilet and before and after meals.

Vaccination is available against tick-borne and Japanese encephalitis and should be considered for at-risk individuals. Post-infectious encephalomyelitis complicating smallpox vaccination is avoidable, for all intents and purposes, as smallpox is nearly eradicated. Contraindication to Pertussis immunization should be observed in patients with encephalitis.