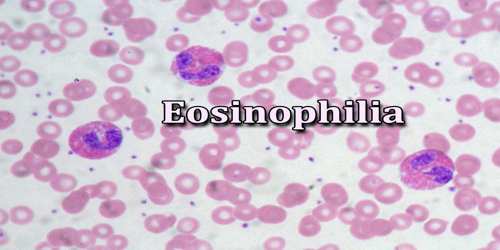 Eosinophilia is a condition in which the peripheral blood contains an excessive number of eosinophils, more than 500/µL. It may be classified into mild (500-1500/µL); moderate (1500-5000/µL); and severe (over 5000/µL) eosinophilia. The eosinophil is distinguished from other white blood cells by the presence within its membrane of coarse granules, which stain orange-red with a special stain used by the hospital laboratory, called Romanowsky stain. Eosinophils usually account for less than 7% of the circulating leukocytes. Eosinophilia is termed primary or secondary, with respect to its causation.

In areas of the world where parasitic diseases are common, they are the usual cause of eosinophilia. In developed nations, eosinophilia is most often due to allergy or, less often, a drug reaction. There are numerous other causes of eosinophilia, but individually they are quite uncommon.

Causes and Symptoms of Eosinophilia

Additional causes of eosinophilia include reactions to certain drugs (glucophage does not usually cause eosinophilia), infections such as scarlet fever, tuberculosis and erythema multiforme (characterized by red rashes on the skin), skin diseases such as eczema and pemphigus, Hodgkins disease, ulcerative colitis and medications such as chlorpromazine, digitalis, penicillin and streptomycin. Eosinophils help promote inflammation, which plays a beneficial role in isolating and controlling a disease site. But sometimes inflammation may be greater than is necessary, which can lead to troublesome symptoms or even tissue damage. This can be caused by a variety of factors, including:

Allergic reactions to drugs are a common cause of eosinophilia, with manifestations ranging from diffuse maculopapular rash, to severe life-threatening drug reactions with eosinophilia and systemic symptoms (DRESS).

Eosinophilia may be completely asymptomatic, especially with counts below 1500/µL.However, with markedly high counts, organ damage may occur. On the other hand, secondary eosinophilia may be associated with symptoms of the underlying conditions. Diagnosis and Treatment of Eosinophilia

Diagnosis requires a thorough history of travel, drug exposure, allergies and the use of herbal or medicinal supplements. Symptoms such as fever, joint pain or swelling, urinary discoloration, skin rashes or lymph node enlargement need to be elicited. A detailed physical examination will focus on any specific symptoms. Further laboratory testing may include stool testing for parasite ova, as well as organ-specific tests such as a chest X ray or urinalysis.

Treatment is based on cessation of exposure to any identified underlying condition, or to any drug or supplement. In many cases, no primary cause is found, suggesting that eosinophilia is secondary to allergy or parasitosis. In such cases, a brief trial of low-dose corticosteroids often lowers the eosinophil count, confirming the secondary nature of the raised eosinophil count.