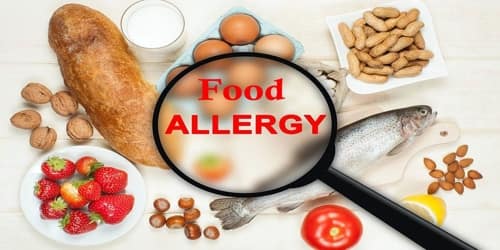 Definition: Food allergy is an immune system reaction that occurs soon after eating a certain food. The signs and symptoms may range from mild to severe. They may include itchiness, swelling of the tongue, vomiting, diarrhea, hives, trouble breathing, or low blood pressure. This typically occurs within minutes to several hours of exposure. When the symptoms are severe, it is known as anaphylaxis.

Food allergy is among the diseases considered to be part of the Atopic March. Also known as the Allergic March, this term refers to the progression of allergic diseases in a person’s life: eczema, food allergy, allergic rhinitis, and asthma. Food allergy affects an estimated 6 to 8 percent of children under age 3 and up to 3 percent of adults. While there’s no cure, some children outgrow their food allergy as they get older.

In the developed world, about 4% to 8% of people have at least one food allergy. They are more common in children than adults and appear to be increasing in frequency. In developed countries, a large proportion of people believe they have food allergies when they actually do not have them. The declaration of the presence of trace amounts of allergens in foods is not mandatory in any country, with the exception of Brazil.

Causes and Symptoms of Food Allergy: The job of the body’s immune system is to identify and destroy germs (such as bacteria or viruses) that make people sick. A food allergy happens when their immune system overreacts to a harmless food protein—an allergen. The most common food allergies are allergies to milk, eggs, peanuts, tree nuts, seafood, shellfish, soy, and wheat. These are often referred to as “the big eight”. Allergies to seeds — especially sesame — seem to be increasing in many countries. Food allergies are not the same as food intolerances, and food allergy symptoms overlap with symptoms of other medical conditions.

In adults, the majority of food allergies are triggered by certain proteins in:

Symptoms may appear almost immediately or up to 2 hours after people have eaten the food (rarely, they appear 4-6 hours later). Symptoms can include:

People can get a rash in areas that come in contact with foods. Some people are so sensitive to food allergens that the odor of that particular food can cause a reaction. In some cases, an allergist may wish to conduct an oral food challenge, which is considered the most accurate way to make a food allergy diagnosis. During an oral food challenge, which is conducted under strict medical supervision, the patient is fed tiny amounts of the suspected trigger food in increasing doses over a period of time, followed by a few hours of observation to see if a reaction occurs. This test is helpful when the patient history is unclear or if the skin or blood tests are inconclusive. It also can be used to determine if an allergy has been outgrown.

Currently, there is no cure for food allergies. The only way to prevent reactions is to completely avoid the food people are allergic to. Mild reactions usually will go away without treatment. For rashes, skin creams may ease discomfort, while antihistamines can help reduce itching and other symptoms.

For more serious reactions, corticosteroids like prednisone will reduce swelling. In life-threatening situations, an epinephrine injection can start to reverse symptoms and is the only effective treatment.

Research on alternative food allergy treatments is limited. However, many people do try them and claim that certain treatments help. Acupuncture point injection therapy has been found to be beneficial for the treatment of hives, although more research is needed to confirm these findings.

To avoid an allergic reaction, a strict diet can be followed. It is difficult to determine the amount of allergenic food required to elicit a reaction, so complete avoidance should be attempted. In some cases, hypersensitive reactions can be triggered by exposures to allergens through skin contact, inhalation, kissing, participation in sports, blood transfusions, cosmetics, and alcohol.