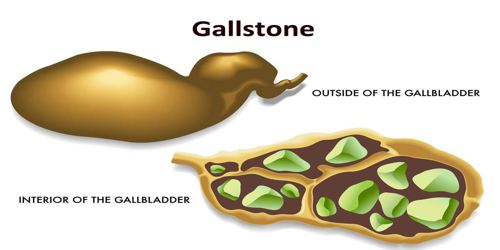 Gallstone is a small, hard, abnormal mass composed chiefly of cholesterol, calcium salts, and bile pigments, formed in the gallbladder or in a bile duct. The presence of gallstones can lead to painful obstruction or infection and is sometimes treated with cholecystectomy. The two main kinds of Gallstones are:

Gallstones are thought to develop because of an imbalance in the chemical make-up of bile inside the gallbladder. In most cases the levels of cholesterol in bile become too high and the excess cholesterol forms into stones. There may be several reasons, including:

Bile can be part of the problem. Our body needs bile, but if it has too much cholesterol in it, that makes gallstones more likely. The majorities of people with gallstones have no signs or symptoms and are unaware of their gallstones. (The gallstones are “silent.”) These gallstones often are found as a result of tests (for example, ultrasound or X-ray examination of the abdomen) performed while evaluating medical conditions other than gallstones. Symptoms can appear later in life, however, after many years without symptoms. Thus, over a period of five years, approximately 10% of people with silent gallstones will develop symptoms. Once symptoms develop, they are likely to continue and often will worsen.

The most common symptom of gallstones is biliary colic. Biliary colic is a very specific type of pain, occurring as the primary or only symptom in 80% of people with gallstones who develop symptoms. Biliary colic occurs when the bile ducts (cystic, hepatic ducts or common bile duct) are suddenly blocked by a gallstone.

In addition to pain, nausea, and vomiting, a person may experience a fever. If the stones block the duct and cause bilirubin to leak into the bloodstream and surrounding tissue, there may also be jaundice and itching. This can also lead to confusion. If this is the case, the liver enzymes are likely to be raised.

Diagnosis and Treatment of Gallstone

Blood tests to check for signs of infection or obstruction, and to rule out other conditions. Ultrasound. This quick procedure is done in patient’s doctor’s office, and it makes images of the inside of their body. CT scan. Specialized X-rays allow doctor to see inside patient’s body, including their gallbladder.

Most gallstones are silent, and do not need treatment. If silent gallstones are discovered in an individual at age 65 (or older), the chance of developing symptoms from the gallstones is only 20% (or less) assuming a life span of 75 years. In this instance, it is reasonable not to treat the individual. Cholecystectomy (gallbladder removal) has a 99% chance of eliminating the recurrence of cholelithiasis. Surgery is only indicated in symptomatic patients. The lack of a gallbladder may have no negative consequences in many people. However, there is a portion of the population between 10 and 15%, who develop a condition called postcholecystectomy syndrome which may cause gastrointestinal distress and persistent pain in the upper-right abdomen, as well as a 10% risk of developing chronic diarrhea.