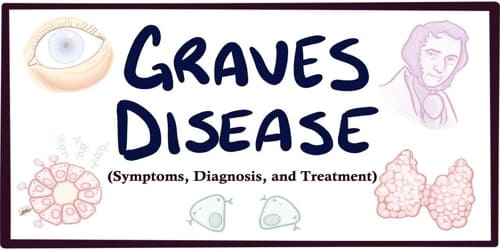 The exact cause is unclear; however, it is believed to involve a combination of genetic and environmental factors. A person is more likely to be affected if they have a family member with the disease. The diagnosis may be suspected based on symptoms and confirmed with blood tests and radioiodine uptake. Typically, blood tests show a raised T3 and T4, low TSH, increased radioiodine uptake in all areas of the thyroid, and TSI antibodies.

Treatment of Graves’ disease is aimed at decreasing the number of thyroid hormones being produced by the thyroid gland, which relieves symptoms of the disease. Depending on the choice of treatment, individuals who are treated for Graves’ disease may have a temporary or permanent remission from Graves’ symptoms. Surgery to remove the thyroid is another option. Eye problems may require additional treatments.

Graves’ disease will develop in about 0.5% of males and 3% of females. It occurs about 7.5 times more often in women than in men. Often, it starts between the ages of 40 and 60 but can begin at any age.

Graves’ disease is named after Robert J. Graves, an Irish doctor who described the condition in several of his patients in the 1830s. In Europe, the disease is often referred to as Basedow’s disease, named after a German physician, Carl A. von Basedow, who was also one of the first people to describe the illness. Common signs and symptoms of Graves’ disease include:

If people are experiencing any severe symptoms such as irregular heartbeat or difficulty breathing, it’s important to seek emergency care immediately.

Symptoms of Graves’ ophthalmopathy include:

An uncommon manifestation of Graves’ disease, called Graves’ dermopathy, is the reddening and thickening of the skin, most often on our shins or the tops of our feet. During the physical exam, in addition to asking people about their symptoms, the doctor will likely measure their pulse and blood pressure, examine their eyes and thyroid gland, check their reflexes, and test them for a tremor.

Lab tests to measure the number of thyroid hormones in the blood include:

In addition, blood tests to find out people’s hormone levels may be performed. Based on their symptoms, other tests may be done. These could include an MRI, CT scan, or ultrasound of the eyes and eye sockets.

The treatment goals for Graves’ disease are to inhibit the production of thyroid hormones and to block the effect of the hormones on the body. Some treatments include:

Mild symptoms of Graves’ ophthalmopathy may be managed by using over-the-counter artificial tears during the day and lubricating gels at night. If the patient’s symptoms are more severe, the doctor may recommend: