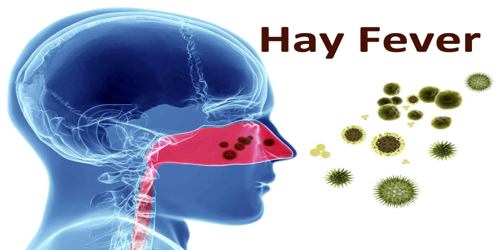 Hay fever is a seasonal allergy to airborne particles characterized by itchy eyes, runny nose, nasal congestion, sneezing, itchy throat, and excess mucus. It is also known as allergic rhinitis or pollinosis. It is a misnomer because it is not caused by hay and it does not produce a fever. Signs and symptoms include a runny or stuffy nose, sneezing, red, itchy, and watery eyes, and swelling around the eyes. The fluid from the nose is usually clear. Many people with allergic rhinitis also have asthma, allergic conjunctivitis, or atopic dermatitis. Like any other allergy, allergic rhinitis is an inappropriate immune system response to an allergen – most commonly house dust mite, pet, pollen and mould. The allergen comes into contact with the sensitive, moist lining in your nose and sinuses and sets off the allergic response.

Hay fever is the type of allergy that affects the greatest number of people. In Western countries, between 10–30% of people are affected in a given year. It is often considered a nuisance rather than a major disease and most people will self-treat. However, recent studies have revealed that hay fever has a huge impact on quality of life.

Hay fever is often an inherited trait (genetically determined). The majority of patients with hay fever have a parent or sibling who also has allergies. People with asthma or eczema (allergic dermatitis) are more likely than others to develop hay fever; and about one-third of those with allergic rhinitis also have at least mild, intermittent, allergic asthma.

The most common triggers for people with hay fever (allergic rhinitis) are pollen, dust mite, pet and mould allergens.  Seasonal allergic rhinitis (hay fever) is usually triggered by wind-borne pollen from trees, grass and weeds. Early spring symptoms point to tree pollen, while nasal allergy in late spring and summer indicates that grass and weed pollens are the culprits. And overlapping the grass season is the weed pollen season, which usually starts in late spring and extends through to the end of summer. Hay fever (or Allergic rhinitis) may also be caused by allergy to Balsam of Peru, which is in various fragrances and other products.

Symptoms of hay fever (allergic rhinitis) can be any combination of itching in the back of the throat, eyes or nose, sneezing, runny eyes or nose, and blocked nose.

A person may have any or all of the following:

Diagnosis and Treatment of Hay fever

Skin testing is the most common method of allergy testing. This may include a patch test to determine if a particular substance is causing the rhinitis, or an intradermal, scratch, or other test. Allergy testing can either show allergies that are not actually causing symptoms or miss allergies that do cause symptoms. The intradermal allergy test is more sensitive than the skin prick test but is more often positive in people that do not have symptoms to that allergen. There’s currently no cure for hay fever, but most people are able to relieve symptoms with treatment, at least to a certain extent. Treatment options for hay fever include antihistamines, which can help to prevent an allergic reaction from occurring and corticosteroids (steroids), which help to reduce inflammation and swelling.

Intranasal corticosteroids are used to control symptoms associated with sneezing, rhinorrhea, itching, and nasal congestion. Steroid nasal sprays are effective and safe, and may be effective without oral antihistamines. They take several days to act and so must be taken continually for several weeks, as their therapeutic effect builds up with time. Other measures that may be used second line include: decongestants, cromolyn, leukotriene receptor antagonists, and nonpharmacologic therapies such as nasal irrigation.