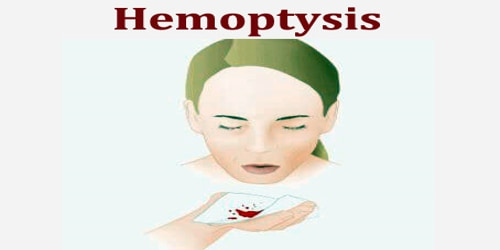 Definition: Hemoptysis (also known as hemoptysis or hemoptysis), is simply a medical term for coughing up blood. The blood can appear as flecks, streaks or can be quite massive in amount. This can occur with lung cancer, infections such as tuberculosis, bronchitis, or pneumonia, and certain cardiovascular conditions. Hemoptysis is considered massive at 300 mL (11 imp fl oz; 10 US fl oz). It can be due to a minor infection or a life-threatening medical emergency.

It can be caused by bleeding within the lungs or after a severe nosebleed. The person may cough up only blood or blood mixed with phlegm (sputum). Symptoms can be confused with blood that is actually coughed up from the stomach rather than from the respiratory system.

In such cases, there are always severe injuries. The primary danger comes from choking, rather than blood loss. Causes, Signs, and Symptoms of Hemoptysis: There are many different causes of haemoptysis (hemoptysis). In fact, in about 25% of cases, no cause is identified at all. In the rest of the world, tuberculosis, a bacterial infection of the lungs, is the most common cause of hemoptysis.

Some of the causes are:

In about one-quarter of cases, even after a thorough investigation, the cause of the bleeding is never found. Generally, coughing up blood would be alarming enough in itself to prompt one to get medical treatment. However, there are a number of symptoms that may accompany hemoptysis that indicate the possibility of a serious medical emergency. In addition to coughing up blood and depending on what is causing the bloody sputum, a patient may notice other symptoms including the following:

Even without other symptoms, anyone who coughs up blood should contact his or her physician or health care practitioner. In most cases, hemoptysis is symptomatic of a mild bronchial infection; it can be a sign of a more serious illness.

There is a big difference, in terms of prognosis (final outcome and expected recovery) and treatment, between hemoptysis and hematemesis (vomiting blood).

Diagnosis and Treatment of Hemoptysis: Many, if not all of the causes of haemoptysis (hemoptysis) require looking into by a doctor and there are many very serious conditions that can lead to it. The doctor will want to examine the patient’s heart and their lungs for any signs of diseases that can cause them to cough up blood. They will probably also want to look in the patient’s nose to make sure that the blood is not coming from there (it can sometimes be hard to tell!). The doctor will also want to take the patient’s temperature, as a fever can be a sign of infection. They will usually want to do a chest x-ray and may want to do a CT or bronchoscopy (where a tube is inserted into the airway allowing the doctor to see what is inside) depending on how severe the hemoptysis is, or what they find after taking the patient’s history and doing an examination.

Treatment depends on the underlying cause. Treatments include iced saline and topical vasoconstrictors such as adrenalin or vasopressin. Selective bronchial intubation can be used to collapse the lung that is bleeding. Also, endobronchial tamponade can be used. Laser photocoagulation can be used to stop bleeding during bronchoscopy. Angiography of bronchial arteries can be performed to locate the bleeding, and it can often be embolized. The surgical option is usually the last resort and can involve, removal of a lung lobe or removal of the entire lung. Non–small-cell lung cancer can also be treated with erlotinib or gefitinib. Cough suppressants can increase the risk of choking.