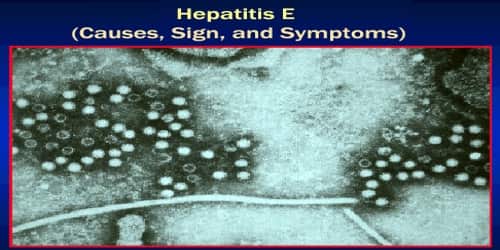 Definition: Hepatitis E is a potentially serious acute disease. It is caused by the hepatitis E virus (HEV). The virus targets the liver. It is one of five known human hepatitis viruses: A, B, C, D, and E. HEV is a positive-sense, single-stranded, nonenveloped, RNA icosahedral virus; HEV has a fecal-oral transmission route.

First identified in 1980 as a distinct entity, hepatitis E disproportionately affects certain areas of the globe: Southeast and Central Asia, North and West Africa, and Mexico. Hepatitis E is most commonly found in those ages 15 to 40; young children may get it, too, but don’t usually develop symptoms.

Most people with hepatitis E get better within a few months. Usually, it doesn’t lead to long-term illness or liver damage like some other forms of hepatitis do. But hepatitis E can be dangerous for pregnant women or anyone with weak immune systems, including the elderly or people who are ill.

According to the World Health Organization (WHO), 20 million cases of hepatitis E infection occur every year, and 44,000 of these cases resulted in death in 2015. It is more common in developing countries. Hepatitis E usually resolves itself but may develop into acute liver failure. Causes, Sign, and Symptoms of Hepatitis E: Hepatitis E infection occurs after ingesting food or water that has been contaminated with feces infected with the virus. Hepatitis E can be transmitted by eating products from infected animals. It can also be transmitted through blood transfusions. An infected pregnant woman can also transfer the virus to her fetus.

Most cases of infection clear up on their own after a few weeks. In other cases, the virus causes liver failure.

The disease is common in resource-limited countries with limited access to essential water, sanitation, hygiene and health services. In these areas, the disease occurs both as outbreaks and as sporadic cases.

People may also be at risk of contracting hepatitis E from animals — cows, pigs, rodents, sheep, and others can harbor the infection.

The incubation period following exposure to the hepatitis E virus ranges from 2 to 10 weeks, with an average of 5–6 weeks. The infected persons are believed to excrete the virus beginning a few days before to around 3-4 weeks after the onset of disease. If a person develops symptoms of hepatitis E, they show up within several weeks of exposure. They include: