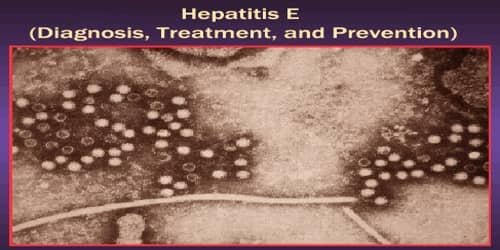 Definition: Hepatitis E is a potentially serious acute disease caused by infection with the hepatitis E virus (HEV). The virus targets the liver. Like the other types of viral hepatitis, hepatitis E causes swelling and inflammation of our liver.

Although hepatitis E often causes an acute and self-limiting infection (the viral infection is temporary and the individual recovers) with low death rates in the western world, it bears a high risk of developing chronic hepatitis in people with a weakened immune system with substantially higher death rates. Hepatitis E occasionally develops into an acute, severe liver disease, and is fatal in about 2% of all cases.

Every year, there are an estimated 20 million HEV infections worldwide, leading to an estimated 3.3 million symptomatic cases of hepatitis E. The virus is transmitted via the fecal-oral route, principally via contaminated water. A vaccine to prevent hepatitis E virus infection has been developed and is licensed in China, but is not yet available elsewhere.

Most cases of hepatitis E are caused by drinking water contaminated by fecal matter. Living in or traveling to countries with poor sanitation can increase your risk. This is especially true in overcrowded areas.

Hepatitis E is a liver disease caused by the hepatitis E virus (HEV): a small virus, with a positive-sense, single-stranded ribonucleic acid (RNA) genome. The virus has at least 4 different types: genotypes 1, 2, 3 and 4. Genotypes 1 and 2 have been found only in humans. Genotype 3 and 4 viruses circulate in several animals (including pigs, wild boars, and deer) without causing any disease, and occasionally infect humans.

First identified in 1980 as a distinct entity, hepatitis E disproportionately affects certain areas of the globe: Southeast and Central Asia, North and West Africa, and Mexico.

Hepatitis E is most commonly found in those ages 15 to 40; young children may get it, too, but don’t usually develop symptoms. Diagnosis and Treatment of Hepatitis E: In terms of the diagnosis of hepatitis E, only a laboratory test that confirms antibodies present for HEV RNA or HEV can be trusted as conclusive for the virus in any individual tested for it.

Compared to other forms of viral hepatitis, hepatitis E is more likely to develop into fulminant (suddenly severe) hepatitis, but the mortality rates are still low — less than 4 percent.

Pregnant women have the highest risk of developing fulminant hepatitis, and the complications can be severe; miscarriage is common, and the mortality rate for women in the third trimester of pregnancy is as high as 20 percent.

A test for viral antigen detection in serum has been developed; its place in the diagnosis of hepatitis E is currently being studied.

There is no specific treatment capable of altering the course of acute hepatitis E. As the disease is usually self-limiting, hospitalization is generally not required. Hospitalization is required for people with fulminant hepatitis, however, and should also be considered for symptomatic pregnant women.

In most cases, hepatitis E goes away on its own in about 4-6 weeks. These steps can help ease patient’s symptoms:

If hepatitis E is suspected and the patient’s immune system is not suppressed, they may not need medications. A doctor may advise them to rest, drink plenty of fluids, avoid alcohol, and practice good hygiene until the infection subsides.

Prevention: Prevention is the most effective approach against the disease. At the population level, transmission of HEV and hepatitis E disease can be reduced by:

On an individual level, infection risk can be reduced by:

Due to the lack of evidence, WHO as of 2015 did not make a recommendation regarding the routine use of the HEV 239 vaccine. National authorities may, however, decide to use the vaccine based on the local epidemiology.