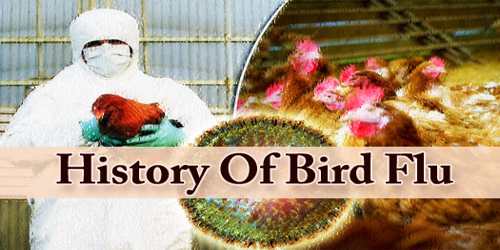 The first known cases in humans were reported in 1997, when an outbreak of avian influenza A virus subtype H5N1 in poultry in Hong Kong led to severe illness in 18 people, one-third of whom died.

There are lots of different strains of the bird flu virus. Most of them don’t infect humans. But there are 4 strains that have caused concern in recent years:

Although H5N1, H7N9 and H5N6 don’t infect people easily and aren’t usually spread from human to human, several people have been infected around the world, leading to a number of deaths. H5N8 has not infected any humans worldwide to date.

Between 2003 and late 2005, outbreaks of subtype H5N1, the most deadly variety of bird flu, occurred among poultry in Cambodia, China, Indonesia, Japan, Kazakhstan, Laos, Malaysia, Romania, Russia, South Korea, Thailand, Turkey, and Vietnam. Hundreds of millions of birds in those countries died from the disease or were killed in attempts to control the epidemics. Similar culling events have taken place since then, including culls in countries in Africa, Asia, and the Middle East.

Between early 2013 and early 2017, 916 lab-confirmed human cases of H7N9 were reported to the World Health Organization (WHO). On 9 January 2017, the National Health and Family Planning Commission of China reported to WHO 106 cases of H7N9 which occurred from late November through late December, including 35 deaths, 2 potential cases of human-to-human transmission, and 80 of these 106 persons stating that they have visited live poultry markets. The cases are reported from Jiangsu (52), Zhejiang (21), Anhui (14), Guangdong (14), Shanghai (2), Fujian (2) and Hunan (1). Similar sudden increases in the number of human cases of H7N9 have occurred in previous years during December and January.

Since the identification of highly pathogenic influenza, infected birds have been found in Asia, Europe, the Middle East, and Africa. Careful control measures, including destroying infected flocks and vaccinating healthy birds, have reduced the number of cases, but the virus continues to exist in poultry flocks in areas of Asia and Africa. In 2007-2008, there were small outbreaks in Bangladesh and Pakistan due to infected domestic chicken flocks.

The most widely quoted date for the beginning of recorded history of avian influenza (initially known as fowl plague) was in 1878 when it was differentiated from other diseases that caused high mortality rates in birds. Fowl plague, however, also included Newcastle disease until as recently as the 1950s. Between 1959 and 1995, there were 15 recorded occasions of the emergence of HPAI viruses in poultry, but losses were minimal. Between 1996 and 2008 however, HPAI outbreaks in poultry have occurred at least 11 times and 4 of these outbreaks have involved millions of birds.

The first human case of illness from highly pathogenic avian influenza (HPAI) was identified in 1997. Since that time, H5N1 has infected 784 individuals with 429 deaths. Human cases of highly pathogenic bird flu have been largely confined to Southeast Asia (India, Bangladesh) and Africa. Mutations often occur in the virus, and it is possible that some mutations could create a more contagious virus that could cause a regional epidemic or a worldwide pandemic of bird flu among humans. Fortunately, the mutations that have occurred to date have not made the virus more contagious, although the concern remains. The identification of H7N9 bird flu strain is worrisome. However, four people in China (two in Shanghai, one in Nanjing, and one in Anhui province) have been identified as being infected with H7N9; two have died. Health officials worldwide are concerned because of the possibility of a bird flu type that could develop easy transmission from birds to humans. Although easy transmission between humans has not yet developed, H7N9 avian influenza virus has infected 622 individuals; 227 of these individuals died from infection to date. The majority of these infections were due to exposure to infected birds or their droppings.

Since 2003, more than 700 human cases of Asian HPAI H5N1 have been reported to the WHO, primarily from 15 countries in Asia, Africa, the Pacific, Europe, and the Middle East, though over 60 countries have been affected. In January 2016, an outbreak of H7N8 was reported in turkeys in Indiana; eventually, nine to 10 farms became infected, and thousands of turkeys were killed and the outbreak halted. There were no reports of human infection.