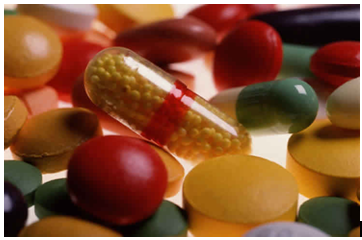 The word “antibiotics” comes from the Greek anti (“against”) and bios (“life”). An antibiotic is a drug that kills or slows the growth of bacteria. Antibiotics are one class of antimicrobial, a larger group which also includes anti-viral, anti-fungal, and anti-parasitic drugs. Antibiotics are chemicals produced by or derived from microorganisms (i.e. bugs or germs such as bacteria and fungi). The first antibiotic was discovered by Alexander Fleming in 1928 in a significant breakthrough for medical science. Antibiotics are among the most frequently prescribed medications in modern medicine.

Antibiotics are used to treat many different bacterial infections. Antibiotics cure disease by killing or injuring bacteria. Bacteria are simple one-celled organisms that can be found, by the billions, all around us: on furniture and counter-tops, in the soil, and on plants and animals. They are a natural and needed part of life. Bacteria cause disease and infection when they are able to gain access to more vulnerable parts of our bodies and multiply rapidly. Bacteria can infect many parts of the body: eyes, ears, throat, sinuses, lungs, airways, skin, stomach, colon, bones, and genitals. Each different type of antibiotic affects different bacteria in different ways. For example, an antibiotic might inhibit a bacterium’s ability to turn glucose into energy, or its ability to construct its cell wall. When this happens, the bacterium dies instead of reproducing.

The development of antibiotics was one of the greatest medical advances of the 20th century. It was Alexander Fleming at St Mary’s Hospital Medical School who noticed a mould growing on a culture plate of bacteria one day in September 1928. Around the Penicillium notatum mould was a clear area where the colonies of bacteria appeared to have been dissolved. Fleming set about establishing the identity of the substance that was killing the bacteria, giving it the name ‘penicillin’. But Fleming only continued to study penicillin for a year or so, and he never got to the stage of purifying and testing its effects against bacterial infections when injected into a living animal or patient.

Howard Florey became Professor of Pathology at Oxford in 1935, moving into a splendid new department, the Sir William Dunn School of Pathology. Florey quickly recruited Ernst Chain to work with him, and they began to look at a range of substances that might have an effect on bacteria.

Around the time Britain declared war on Germany, Chain and Florey came to the conclusion that penicillin was far more effective in combating bacteria than the other candidates. But there was no simple means of testing the activity of the samples of penicillin they produced. And they needed a good method to extract the penicillin from cultures of the Penicillium mould.

With Norman Heatley, a biochemist who became Florey’s research associate in 1940, the team solved both these problems. Heatley devised a new technique to measure the activity of a sample of penicillin and came up with a method called back-extraction to isolate the penicillin. He managed to automate this procedure using a set up consisting of bottles, milk churns, yards of glass and rubber tubing.By 25 May 1940, the team had reached a point where they could carry out a new experiment that would test whether penicillin could be an important antibacterial drug. Eight mice were given lethal doses of streptococci. Four of the mice were then given injections of penicillin. By the next morning all the untreated mice were dead while those that had received penicillin survived for days to weeks.

With this result, Florey realised that he needed to expand production – an effective treatment for infection could be a valuable contribution to Britain’s war effort. He turned the DunnSchool into something of a penicillin factory. Six ‘penicillin girls’ were taken on to maintain production in 700 newly designed vessels which were continuously in use. By February 1941 Florey felt he had enough penicillin to begin trials in humans.

With the help of Charles Fletcher, a young doctor at the Radcliffe Infirmary, on 12 February 1941, Albert Alexander, a 43-year-old policeman, became the first patient to be treated with penicillin. He had scratched his face on a rose bush, the wound had become infected and the infection had spread. Fletcher injected him with penicillin regularly over four days, and within 24 hours he was greatly improved. But supplies of the new drug ran out before his cure was complete. He relapsed at the beginning of March, and died two weeks later. Of the next five patients, four recovered from their infections after a course of penicillin. The other, a child of four, was cured of his infection but tragically died of a brain hemorrhage. The results were published in The Lancet in August 1941.

As similarly impressive results from larger trials began to come in, companies in the US and then the UK began to start production of penicillin on an industrial scale. Supplies of penicillin accompanied the troops making the D-day landings in June 1944, and the death toll from infected wounds during the campaign was dramatically reduced. Penicillin inspired massive efforts to discover other new drugs that could conquer the many diseases still threatening the world. Further antibiotics soon followed, including streptomycin, chloramphenicol, the tetracylines, and erythromycin. Another important family of antibiotics, the cephalosporins, were developed from research at Oxford.

Antibiotics have seen a dramatic change in the figures for deaths and illness from infectious diseases. Antibiotics have also provided safe and effective treatments for the wide range of infections that were a daily problem in hospitals and general practice.

Fleming, Florey and Chain were jointly awarded the Nobel Prize for physiology or medicine in 1945, recognising the tremendous contribution of penicillin to human welfare.

It is estimated that the average duration of many infectious diseases and the severity of certain others have decreased significantly since the introduction of antibiotic therapy. The dramatic drop in mortality rates for such dreaded diseases as meningitis, tuberculosis, and septicemia offers striking evidence of the effectiveness of these agents. Bacterial pneumonia, bacterial endocarditis, typhoid fever, and certain sexually transmitted diseases are also amenable to treatment with antibiotics. So are infections that often follow viral or neoplastic diseases, even though the original illness may not respond to antibiotic therapy.

Antibiotics in small amounts are widely used as feed supplements to stimulate growth of livestock and poultry. They probably act by inhibiting organisms responsible for low-grade infections and by reducing intestinal epithelial inflammation. Many experts believe that this use of antibiotics contributes to the emergence of antibiotic-resistant bacteria that could eventually pose a public health problem.

In cattle, sheep, and swine, antibiotics are effective against economically important diseases. The use of antibiotics in dogs and cats closely resembles their use in human medical practice. In fish farms, antibiotics are usually added to the food or applied to the fish by bathing. The incidence of infections in fish, and animals in general, may be reduced by the use of disease-resistant stock, better hygiene, and better diet.

Although effective against many microorganisms causing disease in plants, antibiotics are not widely used to control crop and plant diseases. Some of the limiting factors are instability of the antibiotic under field conditions, the possibility of harmful residues, and expense. Nevertheless, antibiotic control of some crop pathogens is being practiced, as is true of the rice blast in Japan.

THE DISCOVERY OF ANTIBIOTICS

“One sometimes finds what one is not looking for”

His research and study during his military career inspired him to discover naturally antiseptic enzyme in 1921, which he named lysozyme. This substance existed in tissues and secretions like mucus, tears and egg-white but it did not have much effect on the strongly harmful bacteria. Six years later; as a result of some intelligent serendipity, he stumbled on discovering penicillin. It was in 1928 when he observed while experimenting on influenza virus that a common fungus, Penicillium notatum had destroyed bacteria in a staphylococcus culture plate. Upon subsequent investigation, he found out that mould juice had developed a bacteria-free zone which inhibited the growth of staphylococci. This newly discovered active substance was effective even when diluted up to 800 times. He named it penicillin.

He was knighted in 1944 and was given the Nobel Prize in Physiology or Medicine in 1945 for his extraordinary achievements which revolutionized the medical sciences.

Antibiotics active against bacteria are bacteriostatic or bacteriocidal; that is, they either inhibit growth of susceptible organisms or destroy them. On the basis of their mechanism of action, antibiotics are classified as (1) those that affect bacterial cell-wall biosynthesis, causing loss of viability and often cell lysis (penicillins and cephalosporins, bacitracin, cycloserine, vancomycin); (2) those that act directly on the cell membrane, affecting its barrier function and leading to leakage of intracellular components (polymyxin); (3) those that interfere with protein biosynthesis (chloramphenicol, tetracyclines, erythromycin, spectinomycin, streptomycin, gentamycin); (4) those that affect nucleic acid biosynthesis (rifampicin, novobiocin, quinolones); and (5) those that block specific steps in intermediary metabolism (sulfonamides, trimethoprim).

For an antibiotic to be effective, it must first reach the target site of action on or in the microbial cell. It must also reach the body site at which the infective microorganism resides in sufficient concentration, and remain there long enough to exert its effect. The concentration in the body must remain below that which is toxic to the human cells. The effectiveness of an antibiotic also depends on the severity of the infection and the immune system of the body, being significantly reduced when the immune system is impaired. Complete killing or lysis of the microorganism may be required to achieve a successful outcome.

Antibiotics may be given by injection, orally, or topically. When given orally, they must be absorbed into the body and transported by the blood and extracellular fluids to the site of the infecting organisms. When they are administered topically, such absorption is rarely possible, and the antibiotics then exert their effect only against those organisms present at the site of application.

The therapeutic value of every antibiotic class is gradually eroded by the microbial resistance that invariably follows broad clinical use.

Rapid detection of resistance and pathogen identification are critical for the rational use of antibiotics and implementation of infection control measures. In the absence of such information, treament is empiric, usually involving broad-spectrum agents, which exacerbates resistance development. Inadequate infection control measures encourage dissemination of resistant strains.

A chemical substance produced by a microorganism, which has the capacity to inhibit the growth of or to kill other microorganisms is called as an antibiotic.

An antibiotic that is effective against a wide range of infectious microorganisms which includes both gram positive and gram negative bacteria is called as a Broad spectrum antibiotic.

Broad-spectrum antibiotics are properly used in the following medical situations: