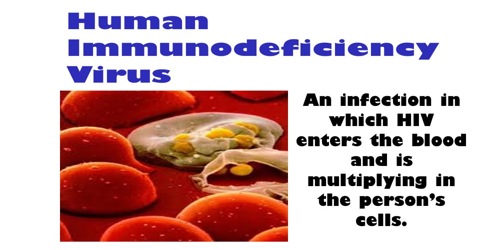 Human Immunodeficiency Virus is a virus that attacks the immune system, the body’s natural defense system. Without a strong immune system, the body has trouble fighting off disease. Both the virus and the infection it causes are called HIV. Infection with HIV occurs by the transfer of blood, semen, vaginal fluid, pre-ejaculate, or breast milk. Within these bodily fluids, HIV is present as both free virus particles and virus within infected immune cells.

HIV infects and destroys certain white blood cells called CD4+ cells. If too many CD4+ cells are destroyed, the body can no longer defend itself against infection.

Where Did HIV Come From? Scientists identified a type of chimpanzee in Central Africa as the source of HIV infection in humans. They believe that the chimpanzee version of the immunodeficiency virus (called simian immunodeficiency virus, or SIV) most likely was transmitted to humans and mutated into HIV when humans hunted these chimpanzees for meat and came into contact with their infected blood. Studies show that HIV may have jumped from apes to humans as far back as the late 1800s. Over decades, the virus slowly spread across Africa and later into other parts of the world. We know that the virus has existed in the United States since at least the mid- to late 1970s.

HIV infection is caused by the human immunodeficiency virus. You can get HIV from contact with infected blood, semen, or vaginal fluids.

Most people get the virus by having unprotected sex with someone who has HIV.

Another common way of getting it is by sharing drug needles with someone who is infected with HIV.

The virus can also be passed from a mother to her baby during pregnancy, birth, or breastfeeding.

HIV doesn’t survive well outside the body. So it can’t be spread by casual contact like kissing or sharing drinking glasses with an infected person. No effective cure currently exists for HIV. But with proper medical care, HIV can be controlled. Treatment for HIV is called antiretroviral therapy or ART. If taken the right way, every day, ART can dramatically prolong the lives of many people infected with HIV, keep them healthy, and greatly lower their chance of infecting others. Before the introduction of ART in the mid-1990s, people with HIV could progress to AIDS (the last stage of HIV infection) in a few years. Today, someone diagnosed with HIV and treated before the disease is far advanced can live nearly as long as someone who does not have HIV.