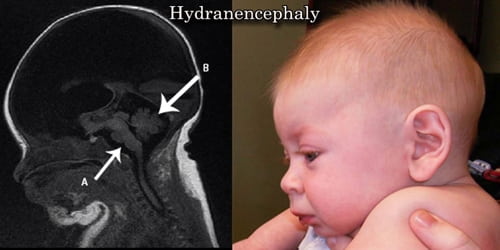 Hydranencephaly is a type of cephalic disorder. These disorders are congenital conditions that derive from either damage to, or abnormal development of, the fetal nervous system in the earliest stages of development in utero. Cephalic is the medical term for “head” or “head end of the body”.

The exact cause of Hydranencephaly is not known. This extremely rare form of Hydrocephalus involves the absence of portions of the brain. Results of neurologic examination in newborns may be normal or abnormal. The head usually appears enlarged at birth. Vision impairment, lack of growth and intellectual deficits are symptomatic of this disorder.

The oldest known person living with hydranencephaly is 33 years old (as of August 2013).

Causes, Sign, and Symptom of Hydranencephaly: Hydranencephaly is the result of injury to a baby’s nervous system or an abnormal formation of it. It occurs during the earliest stages of development in the uterus. But it’s not entirely clear what causes these problems. Hydranencephaly may be an inherited condition. Some researchers believe that prenatal blockage of the carotid artery where it enters the cranium may be a cause of this disorder. However, the reason for the blockage is not known.

Although the exact cause of hydranencephaly remains undetermined in most cases, the most likely general cause is by vascular insults such as stroke or injury, intrauterine infections, or traumatic disorders after the first trimester of pregnancy.

Though hydranencephaly is typically a congenital disorder, it can occur as a postnatal diagnosis in the aftermath of meningitis, intracerebral infarction, and ischemia (stroke), or other traumatic brain injuries. Despite the determination of the cause, hydranencephaly inflicts both males and females in equal numbers.

Hydranencephaly can usually be detected at birth due to an enlarged head. Some infants may appear healthy at birth but may later fail to grow at a normal rate. Irritability, poor feeding, infantile spasms or seizures, and spasticity or rigidity of arms and legs are symptomatic of this disorder. One of the most noticeable symptoms of hydranencephaly is an enlarged head size. Infants with the disease may have increased muscle tone, but limited movement.

Other common hydranencephaly symptoms include: Diagnosis and Treatment of Hydranencephaly: Diagnosing hydranencephaly isn’t always done at birth. Sometimes it may take a few months before symptoms become noticeable.

One common diagnostic test is transillumination. The doctor may also use a special X-ray to take images of a person’s baby’s blood vessels using a dye. This is called an angiogram. It helps reveal abnormalities with circulation.

Another imaging test person’s baby’s doctor may use is called a CT scan. This test can provide the doctor with a detailed and layered look at the brain.

However, diagnostic literature fails to provide a clear distinction between severe obstructive hydrocephalus and hydranencephaly, leaving some children with an unsettled diagnosis.

There is no treatment for Hydranencephaly. A shunt may be recommended to facilitate the drainage of fluid from the brain.

To help remove excess cerebrospinal fluid from the brain, a surgeon can place a shunt, or one-way valve, inside the skull. The shunt is attached to a catheter, a flexible tube. The catheter will run into the abdominal cavity, where the fluid is transferred from the brain.

Calming and relaxation strategies may also help reduce irritability. Medications, such as stool softeners, may also be helpful in treating constipation.