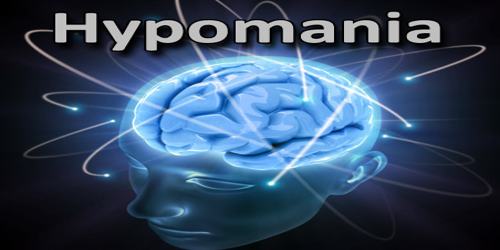 Hypomania is a period characterized by elevated or irritable mood that lasts for a minimum of four days and occurs for a majority of the day nearly every day. The mood of a person experiencing hypomania is different than what that person’s mood would be on a regular day. The word hypomanic tends to confuse some people, because of the “hypo” prefix. Hypo (from the Greek) means “under,” and it is used in this case because this mood state is under, or less manic, than mania. But, compared with normal mood, hypomania is actually higher. Hypomania by itself is not severe enough to cause problems with a person’s work or ability to socialize with others. Nor does hypomania require hospitalization. There are no psychotic features with hypomania, i.e., people with hypomania don’t see or hear things that aren’t really there. It is these differences that distinguish hypomania from what a person would experience during a manic episode.

Hypomania can be difficult to diagnose because it may masquerade as mere happiness. It is important to diagnose hypomania because, as an expression of bipolar disorder, it can cycle into depression and carry an increased risk of suicide.

Hypomania may also be triggered by the occurrence of a highly exciting event in the patient’s situation, such as a substantial financial gain or recognition. It can be associated with narcissistic personality disorder. Individuals in a hypomanic state have a decreased need for sleep, are extremely outgoing and competitive, have a great deal of energy and are otherwise often fully functioning.

The less severe form of high in bipolar disorder is hypomania. People with this form have increased energy and tend to become more active than usual. They do not, however, have delusions or hallucinations. They do not lose touch with reality in the sense that they know who they are and what is real. They are often very jolly to be with but can become impatient if they cannot do what they want.

Mania and hypomania are usually studied together as components of bipolar disorders, and the pathophysiology is usually assumed to be the same. Given that norepinephrine and dopaminergic drugs are capable of triggering hypomania, theories relating to monoamine hyperactivity have been proposed.

Diagnosis and Treatment of Hypomania Severe episodes of hypomania may require mood stabilizers used in treating mania. For mild or moderate episodes, however, it may be possible for a person to deal with hypomania by adopting basic healthy lifestyle habits. That means eating regular meals, doing physical activity every day (a great way to burn off some extra energy), and trying to get at least seven or eight hours of sleep per night. It may also help to learn to recognize common triggers of hypomania, such as sleep deprivation or too much caffeine.