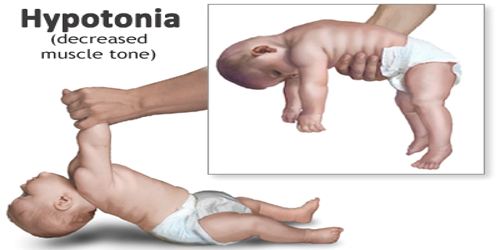 Hypotonia is a common finding with cerebral palsy and other neuromuscular disorders. It is commonly known as floppy baby syndrome, which is a state of low muscle tone (the amount of tension or resistance to stretch in a muscle), often involving reduced muscle strength. The condition was first described in 1956 among infants who were termed “floppy infants”. Central hypotonia originates from the central nervous system, while peripheral hypotonia is related to problems within the spinal cord, peripheral nerves and/or skeletal muscles. Hypotonia is a diseased condition that results in rubbery limbs that are unable to hold themselves up. Treatment is via physical therapy. In some cases, braces may be needed to permit a full range of movement in patients with hypotonia.

Hypotonia isn’t the same as muscle weakness, although it can be difficult to use the affected muscles. In some conditions, muscle weakness sometimes develops in association with hypotonia.

It is most commonly detected in babies soon after birth or at a very young age, although it can also develop later in life.

Hypotonia in an infant may be due to multiple causes. Benign congenital hypotonia usually manifests at birth and shows up as normal limb movements and tendon reflexes along with weakness. There may be mild or normal retardation in motor developments that improves with age. The cause of the condition lies at four different sites –

Hypotonia can also sometimes occur in cerebral palsy, where a number of neurological (brain-related) problems affect a child’s movement and co-ordination, and after serious infections, such as meningitis. Hypotonia present at birth is often noticeable by the time a child is six months old, if not before. Newborn babies and young children with severe hypotonia are often described as being “floppy”.

Signs of hypotonia in a child include:

A child with hypotonia often takes longer to reach motor developmental milestones, such as sitting up, crawling, walking, talking and feeding themselves.

An adult with hypotonia may have the following problems:

At first sight, the infants have an accentuation of their spinal curve, protrusion of their abdomen (due to lack of abdominal muscle tone). On walking, the sufferers are seen to have flat feet, walking tip-toe and difficulty in walking on heels.

Diagnosis and Treament of Hypotonia

If any child is identified as having hypotonia, they should be referred to a specialist healthcare professional, who will try to identify the cause. The specialist will ask about their family history, pregnancy and delivery, and whether any problems have occurred since birth. A number of tests may also be recommended, including blood tests, a computerised tomography (CT) scan, or a magnetic resonance imaging (MRI) scan.

There is currently no known treatment or cure for most (or perhaps all) causes of hypotonia, and objective manifestations can be lifelong. The outcome in any particular case of hypotonia depends largely on the nature of the underlying disease. In some cases, muscle tone improves over time, or the patient may learn or devise coping mechanisms that enable them to overcome the most disabling aspects of the disorder. However, hypotonia caused by cerebellar dysfunction or motor neuron diseases can be progressive and life-threatening. If the actual cause is known, treatment is tailored to the specific disease, followed by symptomatic and supportive therapy for the hypotonia. These treatments can also help improve functions such as mobility and speech. In these cases, treatment may involve physiotherapy, occupational therapy, and speech and language therapy.