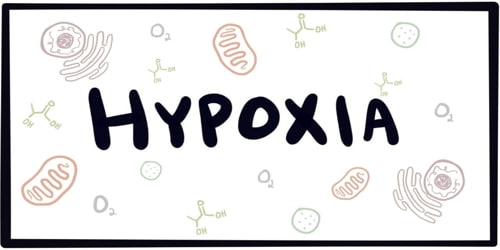 Definition: Hypoxia, in medicine, is a condition in which the body or a region of the body is deprived of adequate oxygen supply at the tissue level. In its extreme form, where oxygen is entirely absent, the condition is called anoxia. It differs from hypoxemia, which means an inadequate amount of oxygen traveling in the blood.

Hypoxia may be classified as either generalized, affecting the whole body, or local, affecting a region of the body. Although hypoxia is often a pathological condition, variations in arterial oxygen concentrations can be part of the normal physiology, for example, during hypoventilation training or strenuous physical exercise.

Hypoxia may affect the whole body (generalized hypoxia), or a specific organ or area of the body (tissue hypoxia). It can also be classified as acute or chronic, with acute meaning a rapid onset, and chronic meaning that hypoxia has been ongoing for some time. It occurs in healthy people when they ascend to high altitude, where it causes altitude sickness leading to potentially fatal complications: high altitude pulmonary edema (HAPE) and high altitude cerebral edema (HACE). Types and Causes of Hypoxia: There are different types of hypoxia or reasons that there is not enough oxygen in the tissues of the body. These include:

Hypoxia can result from a failure at any stage in the delivery of oxygen to cells. This can include decreased partial pressures of oxygen, problems with diffusion of oxygen in the lungs, insufficiently available hemoglobin, problems with blood flow to the end tissue, and problems with breathing rhythm. Numerous illnesses and injuries can cause hypoxia. Those include:

In infants, improper sleep positions or unsafe sleep environments. For example, young babies can be smothered in crib bumpers, or get inadequate oxygen while sleeping on their stomachs.

Histotoxic hypoxia results when the quantity of oxygen reaching the cells is normal, but the cells are unable to use the oxygen effectively as a result of disabled oxidative phosphorylation enzymes. This may occur in cyanide poisoning. Signs and Symptoms of Hypoxia: The signs and symptoms of hypoxia can vary between different people, and by how long the symptoms have been present. Some of them include: Diagnosis and Treatment of Hypoxia: There are many different tests the doctor may order to get a better grasp on why people are experiencing symptoms of low oxygen (a low level of oxygen in your tissues,) Even if the cause of their hypoxia is known, laboratory and radiological studies can be used to get to the ultimate cause of their symptoms. Some tests that may be done if the patients have hypoxia include:

The treatment of hypoxia will depend upon the underlying cause. There is a wide range of conditions and mechanisms that affect those conditions, between different people. The “end organ” manifestations often differ as well.

To counter the effects of high-altitude diseases, the body must return arterial pO2 toward normal. Acclimatization, the means by which the body adapts to higher altitudes, only partially restores pO2 to standard levels. Hyperventilation, the body’s most common response to high-altitude conditions, increases alveolar pO2 by raising the depth and rate of breathing.

Hyperbaric oxygen treatment is sometimes used for severe tissue hypoxia. The increased levels of oxygen provided under pressure can sometimes improve tissue perfusion in a way that is otherwise not possible.

Oxygen concentrators are uniquely suited for this purpose. They require little maintenance and electricity, provide a constant source of oxygen, and eliminate the expensive, and often dangerous, the task of transporting oxygen cylinders to remote areas. Offices and housing already have climate-controlled rooms, in which temperature and humidity are kept at a constant level.

A prescription renewal for home oxygen following hospitalization requires an assessment of the patient for ongoing hypoxemia.