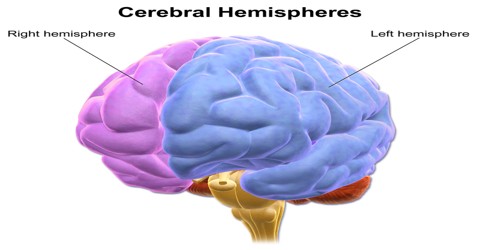 The Cerebral Hemisphere is one half of the brain, either the right or the left. The cerebral hemispheres are the highest level of the Central Nervous System. In humans, the two hemispheres are symmetrical, but not perfectly so. Making up the external part of the brain, and surrounded by a grey matter called the cortex, these hemispheres are lined with grooves that outline the different brain areas, or lobes. Each hemisphere is the site of functions controlling perception and motor function of the opposite side of the body. This is why every person is said to have a dominant hemisphere. There are three poles of the hemispheres named as the occcipital pole (at the back), the frontal pole, and at the front of the temporal lobe the temporal pole. The central sulcus is a prominent fissure which separates the parietal lobe from the frontal lobe and the primary motor cortex from the primary somatosensory cortex. Functions: Responsible for control of the left side of the body, and is the more artistic and creative side of the brain.

Functions: Responsible for control of the right side of the body, and is the more academic and logical side of the brain.

Broad generalizations are often made in popular psychology about certain functions being lateralized, that is, located in the right or left side of the brain. These claims are often inaccurate, as most brain functions are actually distributed across both hemispheres. Most scientific evidence for asymmetry relates to low-level perceptual functions rather than the higher-level functions popularly discussed. Connection between Two Hemispheres of the Brain The corpus callosum also has some specializations itself. For example, in addition to relaying messages from one side of the brain to the other, Biology.About.com notes that the corpus callosum also is involved in controlling eye movement. Functions also include maintaining the balance between focused attention and arousal and in tactile localization.

The cerebral hemispheres are derived from the telencephalon. They arise five weeks after conception as bilateral invaginations of the walls. The hemispheres grow round in a C-shape and then back again, pulling all structures internal to the hemispheres, such as the ventricles with them. The intraventricular foramina also called the foramina of Monro allow communication with the lateral ventricles. The choroid plexus is formed from ependymal cells and vascular mesenchyme.