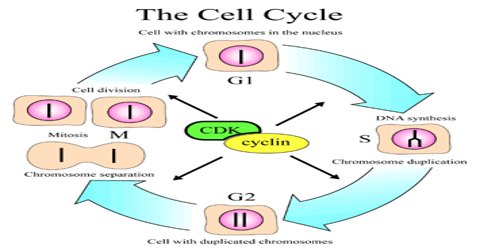 Key Regulators of the Cell Cycle

Key Regulators of the Cell Cycle While this may be beneficial to certain cells, on the whole constant reproduction without cause would be biologically wasteful. Second, internal regulation of the cell cycle is necessary to signal passage from one phase to the next at appropriate times. This regulation is not achieved through strict time constraints, but rather with feedback from the cell.

Cell cycle or cell division cycle is the series of events that happens within the cell leading to its division. The cell cycle consists of several phases. Cyclins are among the most important core cell cycle regulators. The cyclin degrades, deactivating the Cdk, thus signaling exit from a particular phase. There are two classes of cyclins: mitotic cyclins and G1 cyclins.

G1 cyclins bind to Cdk proteins during G1. Once bound and activated, the Cdk signals the cell’s exit from G1 and entry into S phase. When the cell reaches an appropriate size and the cellular environment is correct for DNA replication, the cyclins begin to degrade. G1 cyclin degradation deactivates the Cdk and leads to entry into S phase.

Mitotic cyclins accumulate gradually during G2. Once they reach a high enough concentration, they can bind to Cdks. When mitotic cyclins bind to Cdks in G2, the resulting complex is known as Mitosis-promoting factor (MPF). This complex acts as the signal for the G2 cell to enter mitosis. Once the mitotic cyclin degrades, MPF is inactivated and the cell exits mitosis by dividing and re- entering G1. The cellular signals that we described earlier (cell size, completion of DNA replication, and cellular environment) provide the signals that regulate the synthesis and degradation of cyclins.

Cyclins and Cdks are very evolutionarily conserved, meaning that they are found in many different types of species, from yeast to frogs to humans. The details of the system vary a little: for instance, yeast has just one Cdk, while humans and other mammals have multiple Cdks that are used at different stages of the cell cycle. This kind of an exception to the “Cdks don’t change in levels” rule! But the basic principles are quite similar, so that Cdks and the different types of cyclins can be found in each species. In 2001 Leland H. Hartwell, R. Timothy Hunt and Paul M. Nurse were awarded the Nobel Prize for Medicine or Physiology for their discoveries regarding the key regulators of cell cycle.

This discovery has great impact in cancer research. Chromosome alterations can be caused by faulty cell cycle control, defective S phase or uncontrolled cyclin-CDK activation. These chromosomal abnormalities are directly related to the development of cancer cells. Developments in the field of cancer diagnosis via this discovery include the fact that detecting increased levels of CDK-molecules and cyclins are sometimes found in human tumors like breast cancer and brain tumor. In the field of cancer therapy, inhibitors of CDK-molecules are now being tested for its effects in cancer treatment.

Hematopoietic stem cells (HSCs) are characterized by pluripotentiality and self-renewal ability. The cell cycle is tightly regulated in HSCs by complex factors. Key regulators of the cell cycle in other cell types—including cyclins, cyclin-dependent kinases (CDKs), the retinoblastoma protein family, the transcription factor E2F, and CDK inhibitors—also contribute to such regulation in HSCs. The cell cycle in HSCs is also regulated by external factors such as cytokines produced by niche cells as well as by the ubiquitin–proteasome pathway.