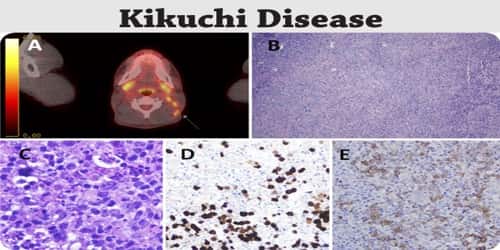 Definition: Kikuchi disease is a disorder that typically causes “swollen glands” in the neck (cervical lymphadenopathy) together with fever or flu-like symptoms. It is fairly common in young people, predominantly young women, in Asia.  It is also called Kikuchi-Fujimoto disease or histiocytic necrotizing lymphadenitis, this condition was discovered in Japan in 1972 and since then has seen in other areas of the world.

It was previously thought that more women than men were affected by Kikuchi disease, however more recent evidence suggests that it is not more likely to affect one sex more than another. Kikuchi disease occurs in a wide age range but generally affects young adults ages 20 to 30.

Causes and Symptoms of Kikuchi Disease: The cause of Kikuchi disease is not known. However, scientists have proposed two possible explanations for the disease. Some believe that it may be due to a virus or other infectious agent. Others believe that it may be an autoimmune condition. Kikuchi disease occurs when one or more agents (for example, a virus) trigger a temporary immune response. Kikuchi disease is not thought to be inherited. Most cases occur sporadically in people with no family history of the condition.

Diagnosis and Treatment of Kikuchi Disease: A diagnosis of Kikuchi disease is often suspected based on the presence of certain signs and symptoms. The only test available to confirm the diagnosis is a lymph node biopsy. Antinuclear antibodies, antiphospholipid antibodies, anti-dsDNA, and rheumatoid factor are usually negative and may help in differentiation from systemic lupus erythematosus. Treatment for Kikuchi disease consists of relieving any fever, flu symptoms, or lymph node tenderness. Nonsteroidal anti-inflammatory drugs (NSAIDs) such as ibuprofen can help with these symptoms. Kikuchi disease will usually clear up on its own within one to six months.

Kikuchi’s disease is a very rare disease mainly seen in Japan. Isolated cases are reported in North America, Europe, Asia and at least two cases New Zealand. The course of the disease is generally benign and self-limiting. Lymph node enlargement usually resolves over several weeks to six months. Recurrence rate is about 3%. Death from Kikuchi disease is extremely rare and usually occurs due to liver, respiratory, or heart failure.