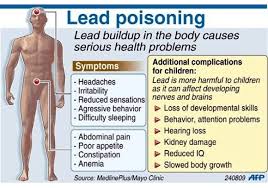 Lead is a naturally occurring metal. It is used in industry and, in the past, was added to petrol and household paints. Lead is a hazard when small particles are taken into the body by swallowing or breathing. Lead is a bluish-white lustrous metal. It is very soft, highly malleable, ductile, and a relatively poor conductor of electricity. It is very resistant to corrosion but tarnishes upon exposure to air. Lead isotopes are the end products of each of the three series of naturally occurring radioactive elements.

Lead is a very strong poison. When a person swallows a lead object or inhales lead dust, some of the poison can stay in the body and cause serious health problems. Lead is much more harmful to children than adults because it can affect children’s developing nerves and brains. The younger the child, the more harmful lead can be. Unborn children are the most vulnerable.

• Lead is a naturally occurring metal that may be found in the home environment.
• Lead exposure can impair intellectual development and, if levels are high enough, damage the brain.
• Children under five years of age are at greater risk.

Common sources of lead around the home include:

Common sources for ingestion are

The symptoms of lead poisoning depend on the degree and length of exposure but may include:

The causes of lead poisoning are—-

The major source of lead is occupational exposure from jobs dealing with lead and lead-based components, resulting in high prevalence of lead toxicity in the population exposed to such activities. Occupational exposure to workers is seen in industries such as lead battery, cable, rubber and plastic, soldering, and foundry work such as casting, forging, and grinding activities. Construction workers involved in painting or paint stripping, plumbing, welding and cutting are also exposed to lead.

Lead in food and food containers

Some clay cookware and dishes may contain high levels of lead that are introduced during the glazing process or form decoration with lead-containing pigments.
Dickinson et al has reported a family of 1 adult and several children aged 4, 5, and 14 years who had lead poisoning from lead leached from cocktail glasses.
Accidental ingestion or inhalation of lead compounds
Fishing sinkers are often made of lead. Mowed et al report a case of an 8-year-old child with lead poisoning after the ingestion of a lead-containing fishing sinker.
Imported vinyl plastic miniblinds manufactured before 1996 were made with lead. The lead becomes a hazardous dust on the surface of the blinds. Children would touch the blinds with their hands, which they then put in their mouths.

In most of its chemical forms, lead can be toxic at the levels to which human beings are exposed in the workplace and in the general environment, whether by inhalation or ingestion in water or food (DeMichele, 1984).
Lead and calcium are used interchangeably by bone. Lead has an affinity for bone and acts by replacing calcium.
Animal studies have shown that certain substances bind lead and increase its solubility, enhancing its absorption. Sodium citrate, acerbate, amino acids, vitamin D, protein and fat, and lactose increase lead solubility.

Reaction of lead with air

The surface of metallic lead is protected by a thin layer of lead oxide, PbO. Only upon heating lead to 600-800°C does lead react with oxygen in air to from lead oxide, PbO.
2Pb(s) + O2(g) → 2PbO(s)
Finely divided lead powder is pyrophoric, however, meaning it is a fire risk.

Reaction of lead with water
The surface of metallic lead is protected by a thin layer of lead oxide, PbO. It does not react with water under normal conditions.

Reaction of lead with acids
The surface of metallic lead is protected by a thin layer of lead oxide, PbO. This renders the lead essentially insoluble in sulphuric acid, and so, in the past, a useful container of this acid. Lead reacts slowly with hydrochloric acid and nitric acid, HNO3. In the latter case, nitrogen oxides are formed together with lead(II) nitrate, Pb(NO3)2.

Lead in the environment
Native lead is rare in nature. Currently lead is usually found in ore with zinc, silver and copper and it is extracted together with these metals. The main lead mineral in Galena (PbS) and there are also deposits of cerrussite and anglesite .Lead occurs naturally in the environment. However, most lead concentrations that are found in the environment are a result of human activities. Due to the application of lead in gasoline an unnatural lead-cycle has consisted. In car engines lead is burned, so that lead salts (chlorines, bromines, and oxides) will originate.

Health effects of lead
Lead can cause several unwanted effects, such as:
– Disruption of the biosynthesis of hemoglobin and anemia
– A rise in blood pressure
– Kidney damage
– Miscarriages and subtle abortions
– Disruption of nervous systems
– Brain damage
– Declined fertility of men through sperm damage
– Diminished learning abilities of children
– Behavioral disruptions of children, such as aggression, impulsive behavior and hyperactivity

Lead can enter a fetus through the placenta of the mother. Because of this it can cause serious damage to the nervous system and the brains of unborn children.

Lead accumulates in the bodies of water organisms and soil organisms. These will experience health effects from lead poisoning.

Soil functions are disturbed by lead intervention, especially near highways and farmlands, where extreme concentrations may be present. Soil organisms than suffer from lead poisoning, too.

Lead is a particularly dangerous chemical, as it can accumulate in individual organisms, but also in entire food chains.

Effects of lead on the human body

Lead disrupts the normal physiologic processes in the CNS due to the similarity of ionized lead to calcium, as both are divalent cations. However, lead can disrupt the physiologic effects of calcium at concentrations lower than those of calcium. Lead causes an inappropriate release of neurotransmitter at rest and competes with calcium to interfere with evoked neurotransmitter release.
Chronic lead nephropathy or chronic tubulointerstitial nephritis (as seen on biopsy) occurs in the setting of long-term lead exposure and is often associated with hypertension and gout.

Renal system
In the kidneys, lead can give rise to Fanconi-like syndromes, chronic (lead) nephropathy, and gout due to lead-induced hyperuricemia. Lead impairs heme synthesis and therefore can give rise to anemia.

Lead not only reduces the sperm count in males but also increases abnormal sperm frequencies as well. At present, its role in male or female infertility is controversial. There is an association between high lead exposure levels and adverse outcomes in pregnancy, but this association becomes equivocal women exposed to lower environmental levels of lead are evaluated.

Lead has been classified as group 2B carcinogen in animals, but data to support its role in human carcinogenesis are insufficient.
Applications

• Lead is a major constituent of the lead-acid battery used extensively in car batteries.
• Lead is used as a coloring element in ceramic glazes, notably in the colors red and yellow.
• Lead is used to form glazing bars for stained glass or other multi-lit windows. The practice has become less common, not for danger but for stylistic reasons.
• Lead is used as projectiles for firearms and fishing sinkers because of its density, low cost compared to alternative products and ease of use due to relatively low melting point.
• Lead or “sheet-lead” is used as a sound deadening layer in such areas as wall, floor and ceiling design in sound studios where levels of airborne and mechanically produced sound are targeted for reduction or virtual elimination.
• Lead is used in some candles to treat the wick to ensure a longer, more even burn. Because of the dangers, European and North American manufacturers use more expensive alternatives such as zinc.
• Lead is used as shielding from radiation, e.g. in x-ray rooms.
• Molten lead is used as a coolant, eg. for lead cooled fast reactors.

The first step should be the removal from the exposure.
Chelation therapy is being used for anyone showing severe symptoms, which is usually associated with BLL’s above 100 μg/dl. The therapy works by reducing lead in blood and soft tissues. Since the treatment is somewhat controversial it should only be done in consultation with an experienced physician.

The primary treatment for mild lead poisoning is to stop the exposure. Removal of the source of lead is critical to reducing blood lead levels. If you can’t remove the source of lead from the environment, you may have alternatives to reduce the likelihood that lead will cause problems. For instance, sometimes it might be preferable to seal in, rather than remove, old lead paint. Your local health department can recommend resources to identify and reduce lead in your home or in your community.

For Classes I through III, ceasing exposure to lead may be sufficient to reduce lead in your body. Children in this case may need to be retested a month after being removed from the source of the lead.

Treating higher classes
for more severe cases, your doctor may recommend treatment called chelation therapy in addition to removal from lead exposure. In chelation therapy, the medicine (chelating agent) you take binds with the lead so that it’s excreted in your urine. Doctors may treat some Class III cases and many Class IV cases with the oral drug succimer (dimercaptosuccinic acid).
Doctors treat lead levels greater than 45 mcg/dL of blood, which fall into Class IV or V, with a chemical called ethylenediaminetetraacetic acid (EDTA). EDTA is administered through injections in your veins (intravenously) and may be combined with the drug dimercaprol (BAL). Depending on your lead level, you may need more than one treatment. The therapy may not reverse damage that already has occurred in cases of severe lead intoxication.
Children with lead toxicity may also be iron deficient. Such children are usually tested for iron deficiency and treated with iron supplements, if needed.

Following these suggestions can reduce lead exposure:
• Clean the house regularly and ensure there is no build-up of dust. Wet dust floors, ledges, window sills and other flat surfaces.
• Discourage your toddler from playing in or eating dirt and from putting dirty fingers or toys in their mouth. Wash toys and dummies frequently. Wash children’s hands and faces before they eat or nap.
• Wash fruit and vegetables before eating.
• Wash family pets frequently.
• Ensure your child’s diet is adequate in calcium and iron and avoid high fat diets because they encourage lead absorption. Also, ensure young children have regular and frequent meals, as more lead is absorbed on an empty stomach.
• Ensure that children do not have access to peeling paint or chewable surfaces painted with lead-based paint, such as old cots and window sills.
• Old toys may contain lead-based paint. If you are unsure, take the safe option and do not give them to children to play with.