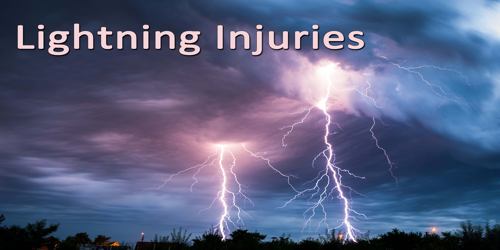 Lightning injuries are a major source of injury and death from the environment, lightning is one of the top three causes of death from environmental origins. They result from three factors: Far more injuries and deaths occur in tropical and subtropical developing countries, and newspaper reports frequently list multiple injuries and deaths in each event. Most people killed or injured by lightning are outside doing recreational activities such as fishing, boating, swimming, or playing sports. Others are working outdoors at construction jobs. Farmers are often struck, too.

Lightning is neither a direct current nor an alternating current. It is a unidirectional, massive, current impulse with several return strokes back to the cloud. Once the connection from the cloud is made, a tremendously large current impulsively flows for an incredibly short time. The most important difference between lightning and high-voltage electrical injuries is the duration of exposure to the current. Lightning has only brief contact with the skin. There is not enough time to allow skin burns. Internal burns and renal failure play a small part in the injury pattern from lightning. Respiratory and cardiac arrest, vascular spasm, and neurologic damage are potentially serious consequences of lightning injuries. Injury from a lightning strike may occur in any of these ways:

People in many countries believe in two kinds of lightning: “natural lightning” and “man-made lightning” that can be called down by witches or can be prevented with charms, herbs, or burying something under a structure as it is being built. In Zambia, it is believed that wearing the color red attracts lightning. Others believe that anyone injured by lightning has been cursed, shunning them and their family. Families may believe their only recourse is to move and start over in a village where their history is unknown. Lightning may cause numerous other injuries:

For most thunderstorms, 70-90% of lightning strikes are intracloud or from cloud to cloud. From 10-30% of lightning can be cloud to ground (CG), depending on the storm. Lightning strikes the earth more than 100 times each second and 8 million times per day. Worldwide, approximately 50,000 thunderstorms occur per day that may result in forest fires, injury to animals and people, and/or damage to electrical and communications lines and electronics, leading to millions of dollars in downtime for businesses. Everyone is a potential victim.

Diagnosis and Treatment of Lightning Injuries

The doctor may order some tests depending on the history of the strike and the findings of the physical examination. Some of the tests that might be ordered include the following: Reported mortality rates range from 10-30 percent, depending on the source of data. Most people who are struck by lightning live to tell the story, but many suffer from long term injury or disability. The doctor will treat those injuries that are discovered on the physical examination.