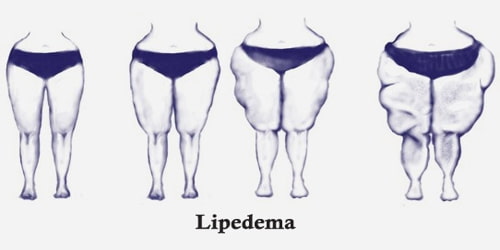 Definition: Lipedema is a condition that mostly affects women and is characterized by a symmetrical swelling in the legs, thighs, and buttocks and sometimes the arms. It is rare in men. In severe cases, the trunk and upper body may be involved. Lipedema is commonly misdiagnosed. It can be extremely painful. The affected areas can be tender and there is a general tendency to bruise easily.

The cause is unknown but is believed to involve genetics and hormonal factors. It often runs in families. Risk factors include being overweight or obese. Other conditions that may present similarly include obesity, lipohypertrophy, chronic venous insufficiency, and lymphedema.

Although it has not been confirmed, it is thought that lipedema may have a genetic basis, as in some cases there is a family history of the condition.

Sometimes lipedema is mistaken for excessive lymphoedema, weight gain, obesity or cellulite or is assumed to be due to a lack of exercise. Lipedema can have a significant impact on quality of life.

A number of treatments may be useful including physiotherapy and exercise. Physiotherapy may help to preserve mobility for a little longer than would otherwise be the case. Treatment does not typically result in complete resolution. It is estimated to affect up to 11% of women. Onset is typical during puberty, pregnancy, or menopause.

Causes and Symptoms of Lipedema: The cause is not known, but doctors suspect female hormones play a role. That’s because the condition affects mostly women, and it often begins or worsens at puberty, during pregnancy, following gynecologic surgery, and around the time of menopause. Lipoedema occurs because of the way that fat (adipose tissue) is distributed under your skin. Fat is distributed unevenly in person’s legs and buttocks instead of in a regular pattern. Commonly there is a fatty area on the inside of the knees and the outside of the hips.

If any women are affected by lipedema:

Over time, expanding fat cells block the vessels of the lymphatic system, which is supposed to help balance body fluid levels and protect against infection. The blockage prevents the proper drainage of lymph fluid, leading to a buildup of fluid called lymphedema.

Diagnosis and Treatment of Lipedema: Visit a doctor if any people have symptoms of lipoedema. The doctor will examine the affected areas. In most cases, this will enable them to determine if people have lipoedema or lymphoedema, or swelling due to other causes. A number of treatments may be useful including physiotherapy and light exercise which does not put undue stress on the lymphatic system. While surgery can remove fat tissue it can also damage lymphatic vessels. Treatment does not typically result in complete resolution.

The use of surgery to treat the condition is controversial. Options include liposuction and lipectomy.

Compression is usually required after liposuction to maintain the reduction.

It is important to talk to the doctor if people have lipedema to discuss the most effective treatment plan for their situation. The doctor may also suggest groups that can provide them with support and information about how to deal with lipedema.