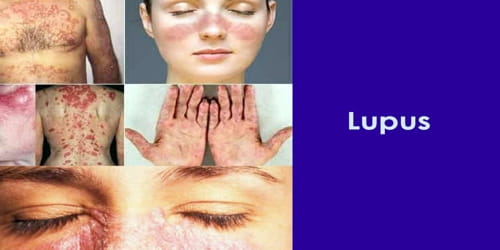 Definition: Lupus is a chronic autoimmune disease in which the body’s immune system becomes hyperactive and attacks normal, healthy tissue. Lupus is systemic, meaning that it affects a wide part of the body, including the joints, kidneys, skin, blood, brain and other organs.

In lupus, something goes wrong with the immune system, which is the part of the body that fights off viruses, bacteria, and germs (“foreign invaders,” like the flu). Normally our immune systems produce proteins called “antibodies” which protect the body from these invaders.

Symptoms vary between people and may be mild to severe. Common symptoms include painful and swollen joints, fever, chest pain, hair loss, mouth ulcers, swollen lymph nodes, feeling tired, and a red rash which is most commonly on the face. Often there are periods of illness, called flares, and periods of remission during which there are few symptoms.

Systemic lupus erythematosus (SLE) accounts for about 70 percent of all lupus cases. While SLE generally is considered the most serious form of lupus, cases range from very mild to severe. SLE affects various parts of the body and can cause joint pain, fatigue, hair loss, sensitivity to light, fever, rash and kidney problems.

Other types of lupus include:

While the cause is not known, lupus is an autoimmune disease – in which our immune system attacks healthy cells by mistake – that can potentially damage many parts of the body. There is no known cure for lupus, though effective treatments are available. Causes, Sign, and Symptom of Lupus: The exact cause of lupus is unknown. Some experts indicate that lupus develops in response to a combination of factors from both inside and outside of the human body including hormones, genetics, and the environment.

Hormones – Hormones are the body’s messengers. They regulate many of the body’s functions. Because nine of every 10 occurrences of lupus are in females, researchers have looked at the relationship between estrogen and lupus. Estrogen is known to be an “immunoenhancing” hormone, which means that women have stronger immune systems than men. For this reason, the incidence of autoimmune diseases is generally higher in women than in men.

Genetics – No specific gene or group of genes has been proven to cause lupus. Researchers have now identified more than 50 genes which they associate with lupus. These genes are more commonly seen in people with lupus than in those without the disease, and while most of these genes have not been shown to directly cause lupus, they are believed to contribute to it.

Certain ethnic groups (people of African, Asian, Hispanic/Latino, Native American, Native Hawaiian, or Pacific Island descent) have a greater risk of developing lupus, which may be related to genes they have in common.

Environment – Most researchers today think that an environmental agent, such as a virus or possibly a chemical, randomly encountered by a genetically susceptible individual, acts to trigger the disease. Researchers have not identified a specific environmental agent as yet but the hypothesis remains likely.

The most common systems of lupus are extreme fatigue, malar rash, joint swelling, and unexplained fevers. These symptoms may come and go, and different symptoms may appear at different times during the course of the disease.

The most common symptoms of lupus (which are the same for men and women) are:

Many of these symptoms occur in other illnesses. In fact, lupus is sometimes called “the great imitator” because its symptoms are often like the symptoms of rheumatoid arthritis, blood disorders, fibromyalgia, diabetes, thyroid problems, Lyme disease, and a number of heart, lung, muscle, and bone diseases. Diagnosis and Treatment of Lupus: Diagnosis of lupus can be problematic. An accurate medical history, physical examination and the results of laboratory tests help the doctor consider other diseases that may mimic lupus or determine if people truly have the disease.

The most useful tests to aid a diagnosis identify certain autoantibodies often present in the blood of people with lupus. Laboratory tests including complete blood count (CBC), erythrocyte sedimentation rate (ESR), urinalysis, blood chemistries, complement levels, ANA and other autoantibody tests. Urine tests can help doctors see if there are any problems with the patient’s kidneys.

Once lupus has been diagnosed, the doctor or rheumatologist will develop a treatment plan based on the patient’s age, sex, health, symptoms, and lifestyle. Treatment plans are tailored to the individual’s needs and may change over time.

Treatment can include corticosteroids and anti-malarial drugs. Certain types of lupus nephritis such as diffuse proliferative glomerulonephritis require intermittent cytotoxic drugs. These drugs include cyclophosphamide and mycophenolate. Hydroxychloroquine was approved by the FDA for lupus in 1955. Medications such as prednisone, mycophenolic acid, and tacrolimus have been used in the past.

Lupus treatments may include drugs to:

Prognosis is typically worse for men and children than for women; however, if symptoms are present after age 60, the disease tends to run a more benign course. Early mortality, within 5 years, is due to organ failure or overwhelming infections, both of which can be altered by early diagnosis and treatment.