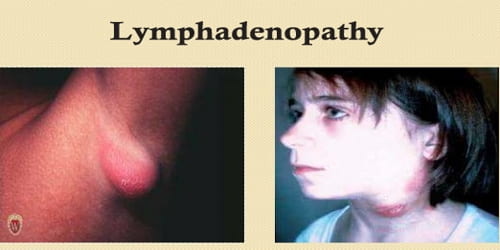 The term (Lymphadenopathy) comes from the word lymph and a combination of the Greek words αδένας, adenas (“gland”) and παθεία, patheia (“act of suffering” or “disease”).

Lymph nodes are small round structures that are present all over the body. They provide a house or enclosure for cells — most commonly white blood cells — that are involved in protecting the human body from infections.

Lymphadenopathy can occur for a number of reasons, including the following:

Lymphadenopathy may be classified by:

Size, where lymphadenopathy in adults is often defined as a short axis of one or more lymph nodes is greater than 10mm.

By malignancy: Benign lymphadenopathy is distinguished from malignant causes which mainly refer to lymphomas or lymph node metastasis

Causes, Sign, and Symptoms of Lymphadenopathy: Infection is the most common cause of lymphadenopathy. The lymphatic system is a component of the immune system, which is designed to fight infection. As cells and fluid accumulate in the lymph nodes when infection is present and cause them to enlarge, the location of the lymph nodes can be used to help establish the cause of infection.

Other causes include autoimmune diseases (such as rheumatoid arthritis or lupus), cancer, and sarcoidosis. Lymphadenopathy as a result of cancer is uncommon, with one study showing that of more than 2500 patients who presented with lymphadenopathy, cancer was the cause in only 1%. Diagnosis and Treatment of Lymphadenopathy: In cervical lymphadenopathy, it is routine to perform a throat examination including a mirror and/or endoscopy. People may need the following tests to help healthcare providers find the cause of your lymphadenopathy: