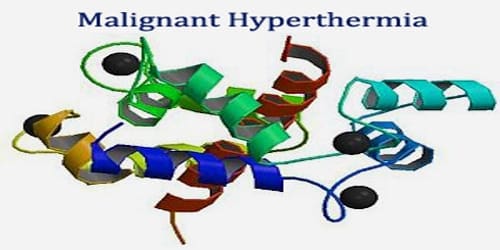 Definition: Malignant hyperthermia (MH) is a condition that triggers a severe reaction to certain drugs used as part of anesthesia for surgery. Symptoms include muscle rigidity, high fever, and a fast heart rate. Complications can include rhabdomyolysis and high blood potassium. Most people who are susceptible are generally otherwise normal when not exposed.

Hyperthermia means high body temperature. This condition is not the same as hyperthermia from medical emergencies such as heat stroke or infection.

The genes that cause malignant hyperthermia are inherited. In most cases, no signs or symptoms of the condition exist until people are exposed to anesthesia. Males are more often affected than females. The risk of death with proper treatment is about 5% while without it is around 75%.

Treatments for the condition include medication and ice packs to cool the body temperature.

Causes, Sign, and Symptom of Malignant Hyperthermia: Malignant hyperthermia usually occurs during or after surgery. But it can occur wherever anesthetic medications are used. This includes:

Symptoms of malignant hyperthermia usually occur within the first hour after exposure to the trigger medication. However, the symptoms can be delayed for up to 12 hours. Most cases occur in children and adults younger than 30. The typical signs of malignant hyperthermia are due to a hypercatabolic state, which presents as a very high temperature, an increased heart rate and abnormally rapid breathing, increased carbon dioxide production, increased oxygen consumption, mixed acidosis, rigid muscles, and rhabdomyolysis.

Diagnosis and Treatment of Malignant Hyperthermia: Most people with malignant hyperthermia are not diagnosed until they have a serious reaction to general anesthesia.

Tests for MH may include: The current treatment of choice is the intravenous administration of dantrolene, the only known antidote, discontinuation of triggering agents, and supportive therapy directed at correcting hyperthermia, acidosis, and organ dysfunction. Treatment must be instituted rapidly on clinical suspicion of the onset of malignant hyperthermia.

A drug called dantrolene (Dantrium) is used to treat the reaction. Ice packs, cooling blankets, and fans may also be used to help reduce body temperature.

Avoid stimulant drugs such as cocaine, amphetamine (speed), and ecstasy. These drugs may cause problems similar to MH in people who are prone to this condition.

Genetic counseling is recommended for anyone with a family history of myopathy, muscular dystrophy, or MH.