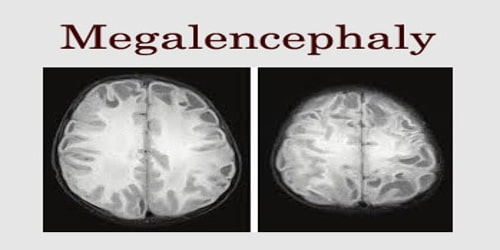 Definition: Megalencephaly, also called macrencephaly, is a condition in which an infant or child has an abnormally large, heavy, and usually malfunctioning brain. While a normal adult brain weighs between 1, 300 and 1, 400 grams, a megalencephalic brain weighs more than 1, 600 grams. A baby may be born with megalencephaly or might develop it over time. Though rare, the condition may cause the brain to weigh twice more than the actual weight.

By definition, the brain weight is greater than average for the age and gender of the child. Head enlargement may be evident at birth or the head may become abnormally large in the early years of life. It is thought to be related to a disturbance in the regulation of cell production in the brain. In normal development, neuron proliferation – the process in which nerve cells divide to form new generations of cells – is regulated so that the correct number of cells is produced in the proper place at the appropriate time.

Megalencephaly if occurs alone, may or may not show any symptoms. It may also occur with a wide range of neurological problems and/or birth defects. It is often confused with macrocephaly, which is characterized by a large head, which may not necessarily be abnormal.

Megalencephaly can occur alone. It may not occur with any symptoms. It can also occur with a wide range of neurological problems or birth defects. It’s sometimes confused with macrocephaly. It is usually diagnosed at birth and is confirmed with an MRI. A mutation in the PI3K-AKT pathway is believed to be the primary cause of brain proliferation and ultimately the root cause of megalencephaly. No treatment currently exists for megalencephaly, management methods are focused at reducing deficits linked with autism. Most recent research is targeted at creating inhibitors to reduce the mutational pathway that causes megalencephaly.

This condition has three broad types –

Causes, Sign, and Symptom of Megalencephaly: Although very little is still known as to the direct cause of megalencephaly, recent studies have begun to provide early indications of possible sources for its formation. Recent research has shown that there is a strong link between genetic pathways that cause the brain to develop and mutations in that pathway that result in brain overgrowth. Genetic factors and genetic disorders can cause megalencephaly. For example, the condition can result from:

Non-genetic causes include disorders of the cerebral spinal fluid. And sometimes there is no known cause.

Males are at an increased risk of three to four times of having megalencephaly than women. It affects between 10 and 30 percent of patients with macrocephaly (CPN). Asymptomatic cases may not be reported, so the exact incidence is not clear.

Megalencephaly is three to four time more common in males than females, reports The Gale Encyclopedia of Neurological Disorders. It affects between 10 and 30 percent of patients with macrocephaly. Asymptomatic cases may not be reported, so the incidence is unknown.

Diagnoses, Treatment, and Prevention of Megalencephaly: Diagnosis of megalencephaly has changed over the years; however, with the development of more advanced equipment, physicians have been able to confirm the disorder with better accuracy. The doctor will perform a complete physical exam to diagnose megalencephaly. They’ll measure the circumference of the patient’s head. They may also measure the heads of patient’s immediate relatives. They may also take the patient’s personal and family medical history.

A neurological exam will then be performed using the technology of an MRI machine in order to confirm the diagnosis of megalencephaly. These imaging tests give detailed information regarding brain size, volume asymmetry and other irregular developments linked with MCAP, MPPH, and hemimegalencephaly. The doctor may also order laboratory tests. This can help them check for genetic and chromosomal disorders.

There is no standard treatment for megalencephaly. Treatment will depend upon the disorder with which the megalencephaly is associated and will address individual symptoms and disabilities.

Megalencephaly isn’t preventable. Since there are very few treatment methods focused on managing megalencephaly, future research is targeted at inhibiting mutation of the pathway. The genetic coding that initiates a single mutation is sporadic and patterns are hard to detect in many cases. Even though very little research has been done to create inhibitors of the PI3K-AKT pathway, several pharmaceutical companies have begun to focus their interests in designing a prevention method for this purpose.