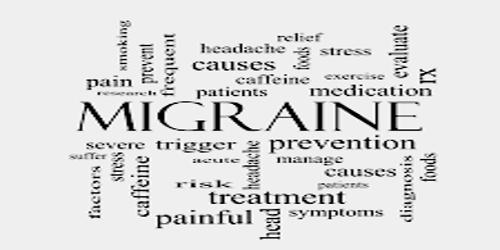 Migraine is a severe recurring headache, usually affecting only one side of the head that is characterized by sharp, throbbing pain and is often accompanied by nausea, vomiting, sensitivity to light, and visual disturbances. Typically, the headaches affect one half of the head, are pulsating in nature, and last from two to 72 hours. It is also called hemicrania, megrim, sick headache. Vasodilation in the brain causes inflammation that results in pain, but the exact cause of migraine is unknown. Migraines are believed to be due to a mixture of environmental and genetic factors. About two-thirds of cases run in families. Changing hormone levels may also play a role, as migraines affect slightly more boys than girls before puberty and two to three times more women than men. The risk of migraines usually decreases during pregnancy. The underlying mechanisms are not fully known. It is, however, believed to involve the nerves and blood vessels of the brain.

Migraine is not just a headache, and attacks can include a variety of debilitating neurological symptoms. Head pain associated with migraine is typically throbbing in nature and located on one side of the head. It is common to experience nausea and vomiting during migraine attacks, in addition to a wide variety of other symptoms. Infants, toddlers, children, and teens often suffer from abdominal migraine, which is characterized by stomach pain, nausea, and vomiting.

There are many other types of headaches which are not categorized as migraines, including but not limited to cluster headaches, tension-type headaches, and sinus headaches.

The exact cause of migraine headaches is unknown; it is thought to be due to abnormal brain activity causing a temporary alteration in the nerve signals, chemicals, and blood flow in the brain. However, they are believed to be related to a mix of environmental and genetic factors. They run in families in about two-thirds of cases and rarely occur due to a single gene defect. While migraines were once believed to be more common in those of high intelligence, this does not appear to be true. A number of psychological conditions are associated, including depression, anxiety, and bipolar disorder, as are many biological events or triggers.

Migraine aura is the second phase of a migraine attack, which is accompanied by distinct symptoms including visual disturbances, loss of vision, dizziness, confusion, aphasia, allodynia, and weakness. The main symptom of a migraine is a throbbing headache on one side of peoples head. They also may feel sick to their stomach and vomit. Activity, light, noise, or odors may make the migraine worse. The pain may move from one side of their head to the other, or they may feel it on both sides at the same time. Different people have different symptoms.

However, many people do not experience auras. Auras are perceptual disturbances, such as:

If any migraine sufferer experiences unusual or worrying features that they do not normally have, then they should seek medical help rather than blaming the migraine.

Diagnosis, Treatment and Preventions of Migraine

The diagnosis of a migraine is based on signs and symptoms. Neuroimaging tests are not necessary to diagnose migraine, but may be used to find other causes of headaches in those whose examination and history do not confirm a migraine diagnosis. There are many different types of migraine medication including:

Painkillers: Painkillers should be taken early rather than allowing the headache to develop. Other analgesics, like aspirin with caffeine and acetaminophen, can often stop the headache or substantially reduce pain.

Metoclopramide may be used to control symptoms such as nausea and vomiting. Serotonin agonists, such as sumatriptan, may also be prescribed for severe migraines or for migraines that are not responding to over-the-counter medications. Another class of treatments is called ergots, which are usually effective if administered at the first sign of a migraine.

However, there are over a hundred potential treatment options for migraine, including natural remedies, over the counter medications, prescription medications, complementary/alternative therapies, and combination treatments. It’s impossible to have tried everything!

If the above changes do not alleviate the symptoms or frequency of migraines, then treatment and prevention focus on avoiding triggers, controlling symptoms, and taking medicines.

Preventive treatments of migraines include medications, nutritional supplements, lifestyle alterations, and surgery. Prevention is recommended in those who have headaches more than two days a week, cannot tolerate the medications used to treat acute attacks, or those with severe attacks that are not easily controlled.