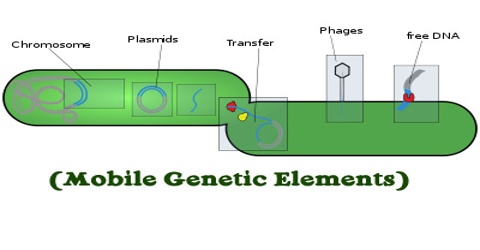 The costs of mobile elements differ significantly with the element. Bacteriophages are commonly divided into virulent and temperate. Upon successful invasion, virulent phages kill the cell to release their progeny (although filamentous phages are able to export progeny without cell lysis). Temperate phages may exert an effect similar to virulent phages, but they may also integrate in the chromosome and replicate with the bacteria (as a quiescent prophage), and some can reside in the cell as plasmid prophages. In this dormant state, the microbial cell may even express useful traits carried by the phages, yet so long as the phage remains functional, the possibility remains that the phage will exit from the quiescent state, kill the host and transmit horizontally.

Mobile Genetic Elements or MGE are a type of DNA that can move around within the genome. They include: Unlike plasmid or viral DNAs, most integrative MGEs, as those mentioned in this thesis, do not abundantly exist in physically independent forms, and some integrated MGEs do not have isolate forms anymore when referring to those involved in ancient transfer events. Therefore they can only be sequenced and analyzed together with the host sequences (chromosomal DNAs), at most time, through bioinformatic approaches.

For inter-genomic MGEs, phylogenetic methods are nowadays the most promising ways to identify HGTs. The key of this type of approach is to find the phylogenetic incongruence between the (mostly) rRNA-based taxonomic phylogeny and the phylogeny of interested gene. This is the most robust method for ancient HGT detection. MGEs are extremely interesting for evolutionary biology. It has been a big transition among research communities, from considering the appearances of MGEs are trivial genetic incidences, to believing they are the main driving force behind life evolution. From molecular point of view, it is apparent that MGEs can produce much more new genetic information within a short period of time than point mutation does. Intra-genomic transposable elements cause genome rearrangement which creates potential opportunities for genome innovation; HGTs introduce new traits such as metabolic properties, virulence attribute, antibiotic resistance and etc. One hypothesis suggests: HGTs were extensive during the early stage of life evolution; such genetic material exchanges probably had started between pre-cellular macromolecular complexes even before the emergence of cellular life form, and had kept as common genetic events throughout primitive cell history; only when cell design complexity reached a critical point, so called “Darwinian Threshold”, vertical genetic information transfer started to play a more important role, and this is also the time when “species” appeared. In recent years, genome screens show that HGTs still commonly exist in prokaryotes, however much less in eukaryotes. This phenomenon logically reflects the idea of above mentioned hypothesis when considering the cell complexity difference between prokaryote and eukaryote.

As described in this thesis, MGEs play important roles in earth life cycle. They make us reconsider the way life evolves and the definition of what a species is. Not mentioned are their application potentials in biotechnology. They also remind us the dangerous consequences when ignoring their existence in practice such as drug/antibiotic usage. In spite of these undebatable facts, the current research infrastructure and society attention on MGEs do not match their importance. Much more effort is needed to better understand their unique natures and their huge influences to the world.