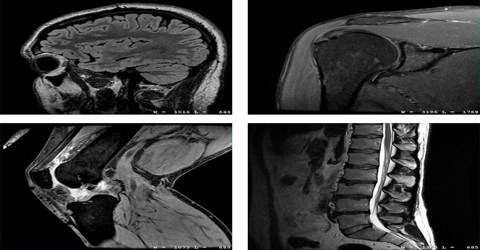 Magnetic resonance imaging (MRI) is a test that uses a magnetic field and pulses of radio wave energy to make pictures of organs and structures inside the body. In many cases, MRI gives different information about structures in the body than can be seen with an X-ray, ultrasound, or computed tomography (CT) scan. MRI also may show problems that cannot be seen with other imaging methods.

It is often used for disease detection, diagnosis, and treatment monitoring. It is based on sophisticated technology that excites and detects the change in the direction of the rotational axis of protons found in the water that makes up living tissues.

MRI is widely used in hospitals and clinics for medical diagnosis, staging of disease and follow-up without exposing the body to ionizing radiation.

How does MRI work? What is MRI used for?

Magnetic resonance imaging (MRI) is done for many reasons. It is used to find problems such as tumors, bleeding, injury, blood vessel diseases, or infection. MRI also may be done to provide more information about a problem seen on an X-ray, ultrasound scan, or CT scan. Contrast material may be used during MRI to show abnormal tissue more clearly.

The brain, spinal cord and nerves, as well as muscles, ligaments, and tendons are seen much more clearly with MRI than with regular x-rays and CT; for this reason MRI is often used to image knee and shoulder injuries. There are no known harmful effects from the strong magnetic field used for MRI. But the magnet is very powerful. The magnet may affect pacemakers, artificial limbs, and other medical devices that contain iron. The magnet will stop a watch that is close to the magnet. Any loose metal object has the risk of causing damage or injury if it gets pulled toward the strong magnet. Metal parts in the eyes can damage the retina . If you may have metal fragments in the eye, an X-ray of the eyes may be done before the MRI. If metal is found, the MRI will not be done. Iron pigments in tattoos or tattooed eyeliner can cause skin or eye irritation.

A magnetic resonance imaging (MRI) is a test that uses a magnetic field and pulses of radio wave energy to make pictures of organs and structures inside the body. The radiologist may discuss initial results of the MRI with you right after the test. Complete results are usually ready for your doctor in 1 to 2 days.