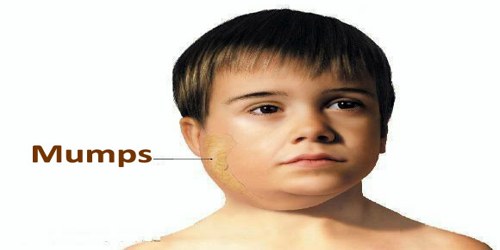 Mumps is an acute inflammatory contagious disease caused by a paramyxovirus and characterized by swelling of the salivary glands, especially the parotids, and sometimes of the pancreas, ovaries, or testes. This disease, mainly affecting children, can be prevented by vaccination. It is also called epidemic parotitis. Initial signs and symptoms often include fever, muscle pain, headache, and feeling tired. This is then usually followed by painful swelling of one or both parotid salivary glands. Symptoms typically occur 16 to 18 days after exposure and resolve after seven to ten days. Symptoms in adults are often more severe than in children. About a third of people have mild or no symptoms. The virus can travel in the air through coughs and sneezes, it may be on surfaces people touch, such as door handles or it can be picked-up from cups, cutlery, bowls or plates. Mumps is spread in the same way as colds and flu – through infected droplets of saliva that can be inhaled or picked up from surfaces and transferred into the mouth or nose.

Mumps can be prevented in 95% of cases by having the routine MMR vaccination in childhood or later in life.

Mumps is due to an infection by the mumps virus. It can be transmitted by respiratory secretions (e.g. saliva) from a person already affected with the condition. When contracting mumps, the virus travels from the respiratory tract to the salivary glands and reproduces, causing the glands to swell.

Mumps is spread from person to person through contact with respiratory secretions, such as saliva from an infected person. When an infected person coughs or sneezes, the droplets aerosolize and can enter the eyes, nose, or mouth of another person. Mumps can also be spread by sharing eating utensils or cups. The virus can also survive on surfaces and then be spread after contact in a similar manner. The symptoms of mumps normally appear 2-3 weeks after the patient has been infected. However, almost 20 percent of people with the virus do not suffer any symptoms at all.

Initially, flu-like symptoms will appear, such as:

Over the next few days, the classic symptoms of mumps will develop. The main symptom is painful and swollen parotid glands, one of three sets of salivary glands; this causes the person’s cheeks to puff out. The swelling normally does not occur in one go – it happens in waves. Other associated symptoms can include:

Rarely, adults can contract mumps. In these cases, the symptoms are generally the same, but sometimes slightly worse and complications are slightly more likely.

Diagnosis, Treatment and Preventions of Mumps

A doctor will diagnose mumps from the symptoms a patient has, especially the swollen glands. Blood, urine or cerebrospinal fluid (CSF) tests may be taken to confirm the diagnosis.

There is no treatment for mumps itself, but age-appropriate painkillers, such as paracetamol or ibuprofen may help relieve some of the symptoms. A cold compress such as a moist flannel may help relieve some of the pain from the swollen glands. Resting and drinking plenty of fluids may be advised, as well as having food such as soup that doesn’t need to be chewed.

Always seek medical advice if you suspect mumps. GPs need to know about cases of mumps so that public health authorities can help stop the infection spreading.

Mumps is considered most contagious in the five days after the onset of symptoms, and isolation is recommended during this period. In someone who has been admitted to the hospital, standard and droplet precautions are needed. People who work in healthcare cannot work for five days.