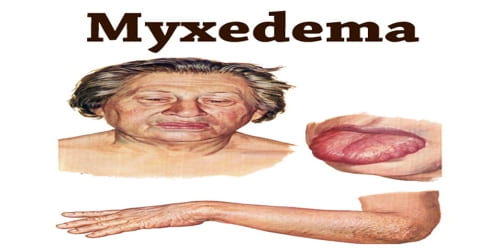 Definition: Myxedema or myxoedema is another term for severely advanced hypothyroidism. This is a condition that occurs when our body doesn’t produce enough thyroid hormone. The thyroid is a small gland that sits right at the front of our neck. However, the term is also used to describe a dermatological change that can occur in hypothyroidism and some forms of hyperthyroidism.

The term also applies to the effects that hypothyroidism can have on the skin, making it appear swollen and puffy.

Myxedema is associated with other symptoms of underactive thyroid, also called hypothyroidism, including lethargy, weight gain, fatigue, depression, and cold sensitivity, among others.

The word myxedema originates from μύξα, taken from ancient Greek to convey ‘mucus’ or ‘slimy substance’, and ὁοίδημα for “swelling”. It can also be thought as nonpitting edema, in contrast to pitting edema. Causes, Sign, and Symptom of Myxedema: Myxedema occurs because of severe hypothyroidism that is not diagnosed or is not treated successfully. It is known to occur in various forms of hypothyroidism, and also in Graves’ disease. One of the hallmarks of Grave’s disease is pretibial myxedema, myxedema of the lower limb.

Causes of hypothyroidism include:

Myxedema is more common in women than in men.

Myxedema can occur in the lower leg (pretibial myxedema) and behind the eyes (exophthalmos). Severe cases, requiring hospitalization can exhibit signs of hypothermia, hypoglycemia, hypotension, respiratory depression, and coma.

Other symptoms of severe hypothyroidism can include:

Myxedema can also lead to low oxygen and high carbon dioxide levels in the blood. Diagnosis and Treatment of Myxedema: The patient’s symptoms will lead the doctor to suspect severe hypothyroidism. Blood tests can help the doctor confirm this. A thyroid-stimulating hormone (TSH) test measures how much TSH patient’s pituitary gland produces.

A thyroxine or T4 test can also be taken to measure a person’s T4 level. Low levels of T4 are a good indicator of hypothyroidism, especially if combined with high levels of TSH.

Medication to replace the reduced thyroid hormones is the most common treatment, and when dosed appropriately, may halt the progression of myxedema.

Thyroid hormone replacement therapy is required in most cases of hypothyroidism.

Other types of treatment target the symptoms of myxedema including:

Myxedema coma is a rare but severe complication of myxedema. It is a life-threatening complication with a mortality rate of 25–60 percent and tends to affect older adults.

Symptoms of myxedema coma include a severe drop in body temperature, reduced breathing, and central nervous system failure, alongside other symptoms of hypothyroidism.