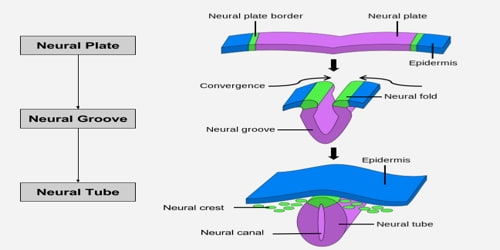 Definition: The neural tube is what eventually becomes the brain and spinal cord. The neural groove gradually deepens as the neural folds become elevated, and ultimately the folds meet and coalesce in the middle line and convert the groove into the closed neural tube. In humans, neural tube closure usually occurs by the fourth week of pregnancy (28th day after conception). The ectodermal wall of the tube forms the rudiment of the nervous system. The center of the tube is the neural canal.

On the gross anatomical level, the neural tube and its lumen bulge and constrict to form the chambers of the brain and the spinal cord. At the tissue level, the cell populations within the wall of the neural tube rearrange themselves to form the different functional regions of the brain and the spinal cord. Finally, on the cellular level, the neuroepithelial cells themselves differentiate into the numerous types of nerve cells (neurons) and supportive cells (glia) present in the body.

Once the initial neural tube forms, there are four stages of subdivisions that take place before the final central nervous system is completed. These divisions are instigated by the neuroepithelial cells, and the divisions take place in the prosencephalon, the mesencephalon, the rhombencephalon, and the spinal cord. At the end of these subdivisions, there is an identifiable brain, spine, and spinal cord that will continue to develop during pregnancy and early years of life.

Taking enough folic acid before and during pregnancy can help decrease the chances of a neural tube defect. Because neural tube development happens before most women even know they’re pregnant, the Centers for Disease Control recommend that all women of childbearing age eat a diet high in folic acid or take a multivitamin containing 0.4 mg of folic acid daily.

Structure of Neural Tube: Four neural tube subdivisions each eventually develop into distinct regions of the central nervous system by the division of neuroepithelial cells: the forebrain (prosencephalon), the midbrain (mesencephalon), the hindbrain (rhombencephalon) and the spinal cord.

The prosencephalon further goes on to develop into the telencephalon (cerebrum) and the diencephalon (the optic vesicles and hypothalamus).

The mesencephalon stays as the midbrain.

For a short time, the neural tube is open both cranially and caudally. These openings, called neuropores, close during the fourth week in humans.

Neural Tube Defects: When the neural tube doesn’t develop properly, it results in birth defects in the brain, spine, or spinal cord. Most of these defects occur during the first month of pregnancy (which is often before a woman even realizes she is pregnant), and the two most common forms of neural tube defects are spina bifida and anencephaly. In spina bifida, the spinal column never closes completely – it’s incomplete and never finishes developing. The most common side effect of this defect is partial or complete paralysis of the legs.