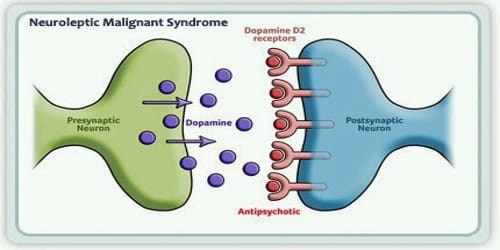 Definition: Neuroleptic malignant syndrome (NMS) is a rare but potentially life-threatening reaction to the use of almost any of a group of antipsychotic drugs or major tranquilizers (neuroleptics). It affects the nervous system and causes symptoms like a high fever and muscle stiffness.

NMS has also been associated with other psychotropic agents that block central dopamine pathways (e.g., metoclopramide). It is characterized by an altered mental state, increased muscle tone or frank rigidity, alterations in the autonomic nervous system, hyperactivity, and hyperthermia.

NMS is a medical emergency. Treatment consists of immediate cessation of the offending medication and provision of supportive measures (hydration and cooling). Additional treatment may be considered if supportive interventions fail.

Among those in psychiatric hospitals on neuroleptics about 15 per 100,000 are affected per year. Males appear to be more often affected than females. In the second half of the 20th century, rates were higher than the present, at about 2% of people in the hospital per year. The condition was first described in 1956.

Individuals using butyrophenones (such as haloperidol and droperidol) or phenothiazines (such as promethazine and chlorpromazine) are reported to be at greatest risk. However, various atypical antipsychotics such as clozapine, olanzapine, risperidone, quetiapine, and ziprasidone have also been implicated in cases.

Any antipsychotic drug can cause NMS. But stronger drugs, like fluphenazine and haloperidol, are more likely to trigger it. Some clinicians believe that neuroleptic malignant syndrome may be related to malignant hyperthermia, a genetic disorder characterized by an abnormal reaction to anesthesia drugs.

One of the clearest risk factors in the development of NMS is the course of drug therapy chosen to treat a condition. Use of high-potency neuroleptics, a rapid increase in the dosage of neuroleptics, and use of long-acting forms of neuroleptics are all known to increase the risk of developing NMS. An important risk factor for this condition is Lewy body dementia. These patients are extremely sensitive to neuroleptics. As a result, neuroleptics should be used cautiously in all cases of dementia. The first symptoms of neuroleptic malignant syndrome are usually muscle cramps and tremors, fever, symptoms of autonomic nervous system instability such as unstable blood pressure, and sudden changes in mental status (agitation, delirium, or coma). Once symptoms appear, they may progress rapidly and reach peak intensity in as little as three days. These symptoms can last anywhere from eight hours to forty days.

NMS symptoms usually last for 7 to 10 days. They may include:

NMS is less likely if a person has previously been stable for a period of time on antipsychotics, especially in situations where the dose has not been changed and there are no issues of noncompliance or consumption of psychoactive substances known to worsen psychosis. Diagnosis and Treatment of Neuroleptic Malignant Syndrome: The diagnosis of the neuroleptic malignant syndrome is based on the presence of characteristics that include treatment with neuroleptic drugs within the past 1-4 weeks.

The doctor will look for the two main symptoms of NMS: a high temperature and stiff muscles. To be diagnosed with it, patients also need to have a few other warning signs, like a fast heartbeat, low or high blood pressure, and sweating.

Some other disorders have symptoms that are similar to NMS. To figure out if the patient has it, the doctor will do one or more of these tests:

NMS is a medical emergency and can lead to death if untreated. The first step is to stop the antipsychotic medication and treat the hyperthermia aggressively, such as with cooling blankets or ice packs to the axillae and groin. The best pharmacological treatment is still unclear.

Medications prescribed as treatment may include skeletal muscle relaxants, such as dantrolene; stimulators of dopamine production and activity, such as bromocriptine; and/or continuous perfusion of central nervous system depressants, such as diazepam.

NMS usually gets better in 1 to 2 weeks. After recovery, most people can start taking antipsychotic medicine again. The doctor might switch them to a different drug.