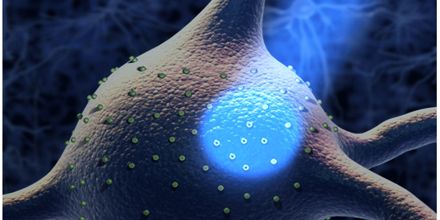 Optogenetics is a method that uses light to modulate molecular events in a targeted manner in living cells or organisms. It relies on the use of genetically-encoded proteins that change conformation in the presence of light to alter cell behavior, for example, by changing the membrane voltage potential of excitable cells.

A new technology has jump-started the technique in neuroscience known as optogenetics where neuroscientists target a single neuron in the brain of a mouse merely by turning on a light. This is done by using a light activated gene and inserting it into the genome of a mouse to be able to easily identify when the particular neuron is firing in the brain.

Biologists have identified proteins in microorganisms, such as algae, that, in response to visible light, can suppress or excite electrical activity within individual cells. These proteins (part of a gene family called “opsins”) enable microorganisms to identify the presence of light in their environment. By isolating the genes coding for light-sensitive proteins and inserting them into a specific neuron, scientists are able to create cells that can be excited or inhibited by different colored light. Various methods are utilized to insert the gene, such as using a virus as a delivery vehicle, or electroporation, in which a foreign gene is integrated into a cell after an electrical pulse is delivered. A fiber-optic cable is then placed directly above the engineered neuron, delivering light to the targeted cell and controlling its activity.

Although optogenetics is still in its infant stage, there has already been an explosion of studies leveraging this new technology which have produced a number of truly brain-altering experiments, albeit in animals, ranging from restoring auditory activity in deaf mice to crafting memories. “It has made a huge impact,” says Isacoff. “Initially, it was so exciting to be able to do this at all that almost anything was jaw dropping.” Work from the World Health Organization has shown that psychiatric disease is the leading source of disability worldwide in terms of years of life lost to death or disability. Even a single psychiatric disease, major depression, is the leading cause of disability worldwide in women aged 15 to 44. But much stigma remains (which may relate to why hearing about this epidemiology is so surprising to many people). Why the stigma? A major reason is our collective lack of understanding. Just as a cancer diagnosis once carried more stigma than it does now (perhaps because of confusion over what cancer really “is,” over concerns for contagion or even over blame for the cancer on personality features of the patient), so too does lack of insight into psychiatric disease contribute to stigmatization, further slowing progress in this enormous problem for global human health. This lack of insight, sadly, is universal: throughout the global community, from members of the general public to the most influential and advanced psychiatrists, we don’t know what psychiatric disease “is” at a fundamental level. Optogenetics is a hot topic amongst the medical community today, surrounded by both praise and criticism. Its purpose is to control a brain’s activity with light. This could have far reaching benefits with humans to help better understand the complex network of neurons that make up the brain. A stronger understanding could help humans better grasp how we create thoughts, emotions and behaviors. Identifying these neurons may sometime help people detect flaws or deformities in the various neurons in the brain that cause devastating mental disorders like schizophrenia, Parkinson’s and depression. By controlling the activity of specific neurons, neuroscientists will begin to learn how each type of neuron contributes to the overall functions of the brain. The firing of a neuron through lighting may someday be a technique to finding the answers to some of the many open questions mankind has wondered about themselves both medically and physiologically since the dawn of time or this technique may not be able to work with humans due to its invasive nature in its current applications with rats. Time will tell as to whether this approach is effective, but nevertheless, the study of the human brain using light will help neuroscientists on the path to better understanding the neurons and how they work across this complex organ.