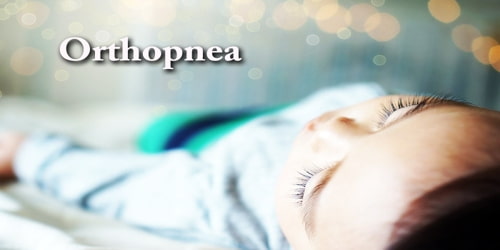 Definition: Orthopnea (or orthopnoea) is shortness of breath (dyspnea) or difficulty breathing when people are lying down. It comes from the Greek words “ortho,” which means straight or vertical, and “pnea,” which means “to breathe.” It is commonly seen as a late manifestation of heart failure, resulting from fluid redistribution into the central circulation, causing an increase in pulmonary capillary pressure. It is also seen in cases of abdominal obesity or pulmonary disease.

In addition to the dyspnea (or sometimes, instead of overt shortness of breath) a person with orthopnea can also experience coughing or wheezing brought on by lying down.

Orthopnea is the opposite of platypnea, shortness of breath that worsens when sitting or standing up. It is considered to be an important symptom mainly because it is often a sign of worsening heart failure, but it can also be caused by other medical conditions. For this reason, anyone who experiences orthopnea should always be evaluated by a physician.

For people with orthopnea, the breathing difficulty typically disappears quickly after they get up from a horizontal position. In a related condition known as paroxysmal nocturnal dyspnea, the shortness of breath wakes the person up a couple of hours after they fall asleep.

An important goal in treating a person with heart failure is to eliminate orthopnea entirely. Most cardiologists will consider lingering orthopnea to be a sign that a person’s heart failure may be inadequately treated, and is usually considered a reason to be more aggressive with therapy. Causes, Signs, and Symptoms of Orthopnea: Orthopnea is often a symptom of conditions that affect the normal functioning of the lungs. These can include heart conditions. It is caused by increased pressure in the blood vessels of our lungs. When people lie down, blood flows from their legs back to the heart and then to their lungs. In healthy people, this redistribution of blood doesn’t cause any problems.

It can also occur in those with asthma and chronic bronchitis, as well as those with sleep apnea or panic disorder. It is also associated with polycystic liver disease. From a neuromuscular perspective, orthopnea is a sign of severe diaphragmatic weakness. Under such circumstances, patients may describe shortness of breath when they bend over (e.g. when tying shoelaces).

Orthopnea is a symptom rather than a condition in itself. The medical term for shortness of breath is dyspnea. Orthopnea is a type of dyspnea that only occurs when a person is lying down.

A symptom similar to orthopnea, and one that is also strongly associated with heart failure is paroxysmal nocturnal dyspnea or PND. Like orthopnea, PND is a type of shortness of breath that occurs in relation to sleep. Both orthopnea and PND are related to fluid redistribution within the body that occurs during sleep, but PND is a more complex condition than “simple” orthopnea.

Orthopnea can be mild or severe. Some people may barely notice this symptom when they use one or two pillows to prop up their upper body. For others, it can cause significant breathing difficulties that they can only relieve by sitting upright or standing.

Other symptoms can also occur, which will depend on the underlying cause. For example, a common cause of orthopnea is heart failure, which can also cause the following symptoms: Diagnosis and Treatment of Orthopnea: In most cases, making the diagnosis of orthopnea is pretty straightforward. Doctors ask patients about nocturnal dyspnea, and whether they are able to sleep while lying flat, as part of a routine medical evaluation. Depending on the suspected cause, the doctor may recommend one or more of the following tests:

Treating orthopnea requires identifying and treating the underlying cause. In most cases, orthopnea is due to heart failure, and an important goal in treating heart failure should be to eliminate orthopnea entirely. A doctor may prescribe medications, such as:

Orthopnea is often a symptom of an underlying heart condition. The treatment of this condition may involve ongoing care and lifestyle changes. Depending on the severity of the heart condition, a person may sometimes require surgery.