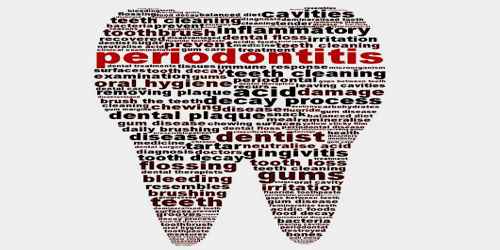 Periodontitis is a serious gum infection that damages the soft tissue and bone that supports the tooth. The word “periodontitis” literally means “inflammation around the tooth.” Periodontitis involves progressive loss of the alveolar bone around the teeth, and if left untreated, can lead to the loosening and subsequent loss of teeth. All periodontal diseases, including periodontitis, are infections which affect the periodontium. Periodontitis and all periodontal diseases are bacterial infections that destroy the attachment fibers and supporting bone that hold the teeth in the mouth. Left untreated, these diseases can lead to tooth loss. The main cause of periodontal disease is a bacterial plaque, a sticky, colorless film that constantly forms on teeth.

Untreated periodontitis will eventually result in tooth loss and may increase the risk of stroke, heart attack, and other health problems. Bacterial plaque, a sticky, colorless membrane that develops over the surface of teeth, is the most common cause of periodontal disease. A diagnosis of periodontitis is established by inspecting the soft gum tissues around the teeth with a probe and by evaluating the patient’s X-ray films, to determine the amount of bone loss around the teeth. Specialists in the treatment of periodontitis are periodontists; their field is known as “periodontology” or “periodontics”.

Periodontitis is caused by certain bacteria, which is also known as periodontal bacteria and by the local inflammation triggered by those bacteria. Although these periodontal bacteria are naturally present in the mouth, they are only harmful when the conditions are right for them to increase dramatically in numbers. This happens when a layer of bacteria and food debris, known as plaque, builds up and is left undisturbed on the teeth, commonly in hard-to-reach areas such as between the teeth. A risk factor is something that increases the risk of developing a condition or disease. The following risk factors are linked to a higher risk of periodontitis:

In the early stages, periodontitis has very few symptoms, and in many individuals, the disease has progressed significantly before they seek treatment. Periodontitis has been linked to increased inflammation in the body, such as indicated by raised levels of C-reactive protein and interleukin-6. It is linked through this to increased risk of stroke, myocardial infarction, and atherosclerosis.

Treatment and Prevention of Periodontitis

With careful assessment and treatment, it is usually possible to completely halt the progress of periodontitis. The key to success is to eliminate the bacterial plaque which is triggering the disease process and to establish excellent oral hygiene practices. Initial treatment: It is important to remove plaque and calculus (tartar) to restore periodontal health.

Periodontal inflammation is not inevitable. The development of gingivitis and periodontitis can be prevented by adopting thorough oral hygiene habits, alongside regular professional examinations and support.

The basic elements of a good oral hygiene regime are:

The most common complication of periodontitis is the loss of teeth. However, patients with periodontitis are also at a higher risk of having respiratory problems, stroke, coronary artery disease, and low birth weight babies. Regular dental check-ups and professional teeth cleaning as required: Dental check-ups serve to monitor the person’s oral hygiene methods and levels of attachment around teeth, identify any early signs of periodontitis, and monitor response to treatment.