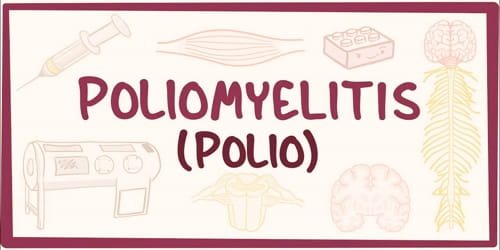 Definition: Poliomyelitis, also known as polio and infantile paralysis, is a highly contagious viral infection that can lead to paralysis, breathing problems, or even death. In about 0.5 percent of cases, there is muscle weakness resulting in an inability to move. This can occur over a few hours to a few days. According to the World Health Organization (WHO), 1 in 200 polio infections will result in permanent paralysis.

Polio can be classified as occurring with or without symptoms. About 95 percent of all cases are asymptomatic, and between 4 and 8 percent of cases are symptomatic.

Poliovirus can be transmitted through direct contact with someone infected with the virus or, less commonly, through contaminated food and water. People carrying the poliovirus can spread the virus for weeks in their feces. People who have the virus but don’t have symptoms can pass the virus to others.

Here are some key points about polio –

Polio mainly affects children younger than 5. However, anyone who hasn’t been vaccinated is at risk of developing the disease. Paralytic polio can lead to temporary or permanent muscle paralysis, disability, bone deformities, and death.

The disease may be diagnosed by finding the virus in the feces or detecting antibodies against it in the blood. The disease only occurs naturally in humans. The disease is preventable with the polio vaccine; however, multiple doses are required for it to be effective. There are two vaccines available to fight polio:

Adults aren’t routinely vaccinated against polio because most are already immune, and the chances of contracting polio are minimal. However, certain adults at high risk of polio who have had a primary vaccination series with either IPV or the oral polio vaccine (OPV) should receive a single booster shot of IPV.

A single booster dose of IPV lasts a lifetime. Adults at risk include those who are traveling to parts of the world where polio still occurs or those who care for people who have polio.

Diagnosis and Treatment: The doctor will diagnose polio by looking at the patient’s symptoms. They’ll perform a physical examination and look for impaired reflexes, back and neck stiffness, or difficulty lifting their head while lying flat.

A laboratory diagnosis is usually made based on recovery of poliovirus from a stool sample or a swab of the pharynx. Antibodies to poliovirus can be diagnostic and are generally detected in the blood of infected patients early in the course of infection. Analysis of the patient’s cerebrospinal fluid (CSF), which is collected by a lumbar puncture (“spinal tap”), reveals an increased number of white blood cells (primarily lymphocytes) and a mildly elevated protein level. Detection of virus in the CSF is diagnostic of paralytic polio but rarely occurs. Because no cure for polio exists, the focus is on increasing comfort, speeding recovery and preventing complications. Supportive treatments include:

Today, many polio survivors with permanent respiratory paralysis use modern jacket-type negative-pressure ventilators worn over the chest and abdomen. Other historical treatments for polio include hydrotherapy, electrotherapy, massage, and passive motion exercises, and surgical treatments, such as tendon lengthening and nerve grafting.

Prevention: The best way to prevent polio is to get the vaccination.

However, other methods of limiting the spread of this potentially fatal disease include:

The US Centers for Disease Control and Prevention recommends polio vaccination boosters for travelers and those who live in countries where the disease is occurring. Once infected there is no specific treatment. Be sure to receive a vaccination before traveling to an area that is prone to polio breakouts.