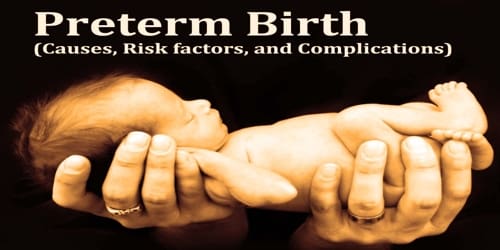 Symptoms of preterm labor include uterine contractions which occur more often than every ten minutes or the leaking of fluid from the vagina. Premature infants are at greater risk for cerebral palsy, delays in development, hearing problems and sight problems. These risks are greater the earlier a baby is born.

The cause of preterm birth is often not known. Risk factors include diabetes, high blood pressure, being pregnant with more than one baby, being either obese or underweight, a number of vaginal infections, tobacco smoking, and psychological stress, among others.

Premature babies, especially those born very early, often have complicated medical problems. Typically, complications of prematurity vary. But the earlier peoples baby is born, the higher the risk of complications.

A number of medications, including nifedipine, may delay delivery so that a mother can be moved to where more medical care is available and the corticosteroids have a greater chance to work. Once the baby is born, care includes keeping the baby warm through the skin to skin contact, supporting breastfeeding, treating infections and supporting breathing. Causes and Risk factors of Preterm birth: Preterm birth occurs for a variety of reasons. Most preterm births happen spontaneously, but some are due to early induction of labor or cesarean birth, whether for medical or non-medical reasons.

Common causes of preterm birth include multiple pregnancies, infections and chronic conditions such as diabetes and high blood pressure; however, often no cause is identified. There could also be a genetic influence. A better understanding of the causes and mechanisms will advance the development of solutions to prevent preterm birth.

Often, the specific cause of premature birth isn’t clear. However, there are known risk factors of premature delivery, including:

There is believed to be a maternal genetic component in preterm birth. Estimated heritability of timing-of-birth in women was 34%. However, the occurrence of preterm birth in families does not follow a clear inheritance pattern, thus supporting the idea that preterm birth is a non-Mendelian trait with a polygenic nature. Complications of Preterm birth: While not all premature babies experience complications, being born too early can cause short-term and long-term health problems. Generally, the earlier a baby is born, the higher the risk of complications. Birth weight plays an important role, too. Babies born too early (especially before 32 weeks) have higher rates of death and disability. Babies who survive may have –

Hematologic complications include anemia of prematurity, thrombocytopenia, and hyperbilirubinemia (jaundice) that can lead to kernicterus.

As the risk of brain damage and developmental delay is significant at that threshold even if the infant survives, there are ethical controversies over the aggressiveness of the care rendered to such infants. The limit of viability has also become a factor in the abortion debate.

A study of 241 children born between 22 and 25 weeks who were currently of school age found that 46 percent had severe or moderate disabilities such as cerebral palsy, vision or hearing loss and learning problems. Thirty-four percent were mildly disabled and 20 percent had no disabilities, while 12 percent had to disable cerebral palsy.