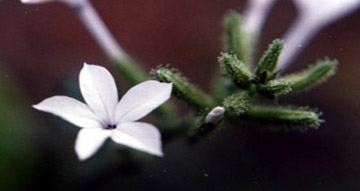 Gloriosa superba Linn, commonly called Glory Lily, is an important medicinal plant and has been used to cure various aliments in the traditional Ayurvedic system of medicine since ancient times. Due to expanding human population, increasing agriculture, rapid urbanization, unchecked extraction of plants or  plants parts for various uses from their natural habitat have led to many species, specially medicinal plants either becoming extinct or rare (Nayar and Sastry, 1987). This situation is causing concern not only for the loss of species diversity, but also because the availability of raw materials for uses in various medicines are becoming scarce day by day. G. superba is one of such species. Earlier, the medicinal properties were thought to be present only in its tubers (Anonymous, 1956) and these were ruthlessly extracted without any concerted attempt to re-grow these plants. However, the seeds also possess the same medicinal properties and contain colchicines (Bhakuni & Suda, 1995). The seeds contain up to 0.75 percent colchicines as compared to only 0.30 percent in its tuber (Gupta, 1997),   but the seed yield in nature is quite low and variable. Hence, the species has been listed under threatened plant category.

The seed yield of Gloriosa superba L. is variable and decreasing in nature. Moreover, the extensive collections of tubers and seeds from its natural population for widespread medicinal uses have made this species threatened in Bangladesh. Therefore, in order to understand the reasons for variable as well as less seed yield, the reproductive biology of this species needs to be studied in detail. Knowledge of reproductive biology of a desired species is necessary in order to find out the causes of low production of its propagules and to develop the convenient method and technique for its cultivation for the increase of propagules production through which its sustainable use can be facilitated.

Here, seed germination of Gloriosa superba has been recordee  in different periods of the year to know the basic knowledge about dormancy period of seeds and germination percentage. Data on Seed germination has been recorded done in the moist blotting paper to reduce the dormancy period and seeds were pre-treated with various chemicals to know their effect or effects on plant growth and tuber size. Tuber of about 50 g weights was planted in partially shady and sunny condition with (50:50) soil-cow dung mixture. Phenological data, germination of pollen grain in sucrose solution, and comparative growth performance of this plant species under sunny and partially shady condition were recorded and presented in the following paragraphs. Data recorded for the effect of pre-sowing seed treatment on seedling growth and tuber size also presented.

From seed germination experiment conducted in earthen pots and open field condition, it was revealed that the months of April and May are suitable for seed germination. During this time, the rate of germination was maximum (34%, 30%) and the dormancy period was minimum (23-40, 28-43 days) in earthen pots and in the open field,  (Table) respectively  and this result was partially in conformity with the findings of previous work (Anonymous, 2002).

In moist blotting chamber, the percentage of seed germination was increased to some extent (28%) and dormancy period was reduced to a greater extent (14-38 days) by incubating the seeds in moist blotting camber, compared to those that were sown in earthen pot and in the field condition on the same date

No. of seed/s germinated in different days after incubation

Total no. of seed germinated

No. of seeds incubated

Soaked in distilled water for 24 hours

The result was in partial agreement with the findings of Kozolowski et al. (1994) who reported that Platycodon grandiflorum seeds germinated well in the laboratory conditions.

In the field conditions seeds that fall on ground were found to germinate from the last of April to the middle of May. This period was recorded as the optimum time for seed germination of G. superba. It was also found to vary owing to the effect of the first rainfall. Plants that were developed from germinated seeds were found to be dried up within 5-7 months without developing any flower. In the following year, new seedlings were observed to grow from the one-year old underground tuber.

It was propagated through seeds or by the sprouting of under ground tuber. Plants propagated from the seeds do not flower in the same year.

The crops were raised using large sized (above 50 g) tubers spaced at 60 cm × 45 cm in sunny and partially shady condition. Seedlings of about 30 days old were transplanted to polythene bags filled with soil: crow dung (50:50) mixture.

Natural regeneration of Gloriosa superba is hampered by the low seed germination percentage.

It is recorded that initial growth parameters were significantly influenced by different seed treating chemicals. Significantly highest value was obtained for most of the parameters   (Table 3) from the plants grown with 4000 ppm Thiourea treated seeds In the field conditions, the existence or survival period of different phenological parameters (PP) of Gloriosa superba have been presented in Table 21.

Table . The existence or survival period of different phonological parameters of Gloriosa superba.

In Gloriosa superba, when non-emasculated flowers were covered completely with polythene bags from the period of budding stage and allowed for pollination after anthesis of the stamens of same the flower, pollination occurred successfully. This observation indicated that G. superba is self-pollinated. At maturity, the flowers of G. superba also develop a special mechanism of stigmatic movement for ensuring the natural self-pollination. Fruit formation was not recorded from the emasculated flowers, which indicate the absence of apomictic fruit formation in this species. Moths, butterflies and ants were found as visitors for the red-coloured flowers of G. superba which exhibit noticeable colour change from the young (yellow) to the mature (red)   stage. Number of leaves at flower initiation

Number of average fully open leaves at flowering stage ranged from 52 to 80 in the sunny condition and 57-180 in the partially shady condition. This was also indicated of the shade-loving nature of Glory Lily plant.