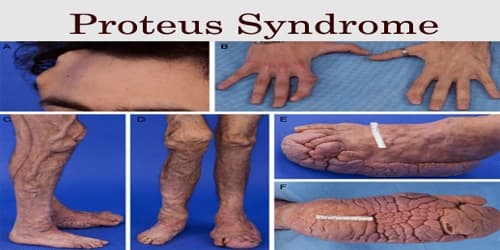 Definition: Proteus Syndrome is a rare genetic disorder, caused by mutant genes. The skin, bone and tissue disorder is asymmetric. The overgrowth is usually asymmetric, which means it affects the right and left sides of the body differently. Newborns with Proteus syndrome have few or no signs of the condition. Overgrowth becomes apparent between the ages of 6 and 18 months and gets more severe with age.

The word “Proteus” comes from the name of the ancient Greek god of change; this name was chosen because the overgrowth in Proteus syndrome can cause changes in the shapes of body structures over time.

It’s estimated that fewer than 500 people worldwide have Proteus syndrome. This genetic change is not inherited from a parent; it arises randomly in one cell during the early stages of development before birth. As cells continue to grow and divide, some cells will have the mutation and other cells will not. This mixture of cells with and without a genetic mutation is known as mosaicism.

That means it affects some cells in the body but not others. This helps to explain why one side of the body may be affected and not the other, and why the severity of symptoms can vary so greatly from one person to another.

Proteus Syndrome comes with a number of symptoms. However, none of these are obvious ones. The Proteus Syndrome patients may grow just as normal and fine as any other child during their childhood. As they grow adults, this progressive condition develops other problems.

Symptoms tend to vary greatly from one person to another and can include:

Afflicted individuals are at increased risk for developing certain tumors including unilateral Ovarian cystadenomas, testicular tumors, meningiomas, and monomorphic adenomas of the parotid gland. Hemimegalencephaly is often found to be associated. Diagnosis and Treatment of Proteus Syndrome: Many sources classify Proteus syndrome to be a type of nevus syndrome. The lesions appear to be distributed in a mosaic manner. It has been confirmed that the disorder is an example of genetic mosaicism.

Abnormal growth is a very easy and obvious measure of this disorder. However, to help doctors diagnose this condition without any delay, a list of diagnostic criteria has been prepared. This list focuses on 3 diagnostic characteristics. These are –

Radiography, CT Scans for detection of skull lesions, pulmonary cysts, MRI of the brain, pelvis, abdomen, and limbs are some of the other tests that can be done for proper diagnosis.

There’s no cure for Proteus syndrome. Treatment generally focuses on minimizing and managing symptoms. The condition affects many parts of the body, so people’s child may need treatment from several doctors, including the following:

Surgery to remove skin overgrowths and excess tissue may be recommended. Doctors may also suggest surgically removing growth plates in the bone to prevent excessive growth.

Proteus syndrome is very rare. Only a few hundred people are thought to be affected with this condition worldwide. Because it is so rare, it can be difficult for doctors to accurately diagnose Proteus syndrome.