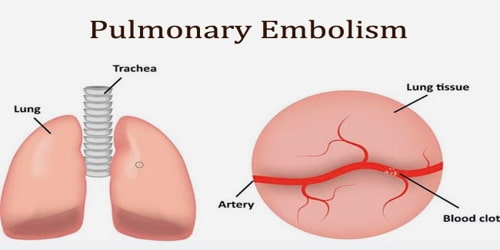 Symptoms of a PE may include shortness of breath, chest pain particularly upon breathing in and coughing up blood. Symptoms of a blood clot in the leg may also be present such as a red, warm, swollen, and painful leg. Signs of a PE include low blood oxygen levels, rapid breathing, rapid heart rate, and sometimes a mild fever. Severe cases can lead to passing out, abnormally low blood pressure, and sudden death.

This blockage is called an embolism (or more than one emboli). The embolus can be made of a fat droplet, an air bubble, or most commonly, a blood clot (thrombus).

Usually, a blood clot forms in the deep veins of the body named a deep-vein thrombosis (DVT). This blood clot travels in the bloodstream, lodging in the pulmonary artery and causing an embolism.

Diagnosis is based on signs and symptoms in combination with test results. If the risk is low a blood test known as a D-dimer will rule out the condition. Otherwise, a CT pulmonary angiography, lung ventilation/perfusion scan, or ultrasound of the legs may confirm the diagnosis. Together deep vein thrombosis and PE are known as venous thromboembolism (VTE).

Blood clots in the deep veins of the body can have several different causes, including: About 90% of emboli are from proximal leg deep vein thromboses (DVTs) or pelvic vein thromboses. DVTs are at risk for dislodging and migrating to the lung circulation. The conditions are generally regarded as a continuum termed venous thromboembolism (VTE).

The most common symptom of a pulmonary embolism is shortness of breath. This may be gradual or sudden.

Other symptoms of a pulmonary embolism include:

More severe cases can include signs such as cyanosis (blue discoloration, usually of the lips and fingers), collapse, and circulatory instability because of decreased blood flow through the lungs and into the left side of the heart. About 15% of all cases of sudden death are attributable to PE. While PE may present with syncope, less than 1% of syncope cases are due to PE. Diagnosis and Treatment of Pulmonary embolism: In some cases, a pulmonary embolism can be difficult to diagnose. This is especially true if a patient has an underlying lung or heart condition, such as emphysema or high blood pressure.

In those who have low risk, age less than 50, heart rate less than 100 beats per minute, oxygen level more than 94% on room air, and no leg swelling, coughing up of blood, surgery or trauma in the last four weeks, previous blood clots, or estrogen use, further testing is not typically needed.

The doctor will typically perform one or more of the following tests to discover the cause of the patient’s symptoms:

Anticoagulant therapy is the mainstay of treatment. Acutely, supportive treatments, such as oxygen or analgesia, may be required. People are often admitted to hospital in the early stages of treatment and tend to remain under inpatient care until the INR has reached therapeutic levels. Increasingly, however, low-risk cases are managed at home in a fashion already common in the treatment of DVT. Evidence to support one approach versus the other is weak.

Surgery may be necessary to remove problematic clots, especially those that restrict blood flow to the lungs or heart.

Pulmonary embolism may be preventable in those with risk factors. People admitted to the hospital may receive preventative medication, including unfractionated heparin, low molecular weight heparin (LMWH), or fondaparinux, and anti-thrombosis stockings to reduce the risk of a DVT in the leg that could dislodge and migrate to the lungs.