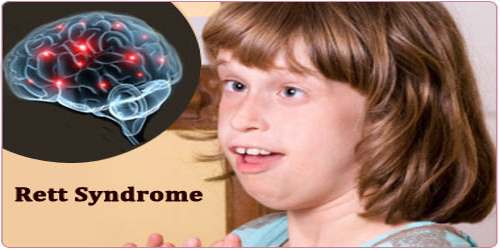 Rett syndrome (RTT) is a rare, severe neurological disorder that affects mostly girls. Girls with the syndrome show normal development during the first 6-18 months of life followed first by a period of stagnation and then by rapid regression in motor and language skills. The hallmark of Rett syndrome is the loss of purposeful hand use and its replacement with stereotyped hand-wringing. Screaming fits and inconsolable crying are common. Rett syndrome is due to a genetic mutation of the MECP2 gene. This gene occurs on the X chromosome. Typically it develops as a new mutation, with less than one percent of cases being inherited from a person’s parents. Boys who have a similar mutation typically die shortly after birth. Diagnosis is based on symptoms and can be confirmed with genetic testing.

There is no cure for Rett syndrome. Treatment is directed at improving symptoms. Anticonvulsants may be used to help with seizures. Special education, physiotherapy, and braces may also be useful. Many people with the condition live into middle age.

The syndrome that bears his name was first described by Andreas Rett, an Austrian pediatrician, in 1966. The frequency of Rett syndrome — about 1 in 10-20,000 girls — appears similar in southwest Sweden, North Dakota, and metropolitan Tokyo.

Rett syndrome is genetic; children almost never inherit the faulty gene from their parents. Rather, it’s a chance mutation that happens in DNA. The MECP2 gene contains instructions for producing a particular protein (MeCP2), which is needed for brain development. The gene abnormality prevents nerve cells in the brain from working properly.

When boys develop the Rett syndrome mutation, they rarely live past birth. Males have only one X chromosome (instead of the two girls have), so the effects of the disease are much more serious, and almost always fatal. In at least 95% of Rett syndrome cases, the cause is a de novo mutation in the child. That is, it is not inherited from either parent. Parents are generally genotypically normal, without a MECP2 mutation.

Rett syndrome is described in four stages, although symptoms will often overlap between each stage. The main features of each stage are described below.

Stage one is sometimes described as ‘stagnation’ because the child’s development slows down or stops altogether. Symptoms include:

These symptoms typically begin during the period from six to 18 months of life and often last for several months, although they can persist for a year or more. During stage two, known as ‘regression’ or the ‘rapid destructive stage’, the child starts to lose some of their abilities. This stage usually begins between the ages of one and four and may last for any time from two months to more than two years. Signs at this stage include:

Stage three of Rett syndrome can begin as early as two years of age or as late as 10 years of age. It often lasts for many years, with many girls remaining in this stage for most of their lives. On the downside, problems that can arise during stage three include:

Gaining and maintaining weight can also be difficult to achieve.

Stage four can last for years or even decades. The main symptoms at this stage are: Diagnosis and Treatments of Rett Syndrome

Genetic testing may be done to look for the gene defect associated with the syndrome. However, since the defect is not identified in everyone with the disease, the diagnosis of Rett syndrome is based on symptoms.

There are several different types of Rett syndrome:

Rett syndrome is classified as atypical if:

Although there is no cure for Rett syndrome, there are treatments that can improve symptoms. And children should continue these treatments for their entire life.

The best options available to treat Rett syndrome include:

Medicines can treat some of the problems with movement in Rett syndrome. Medication can also help control seizures.

Many girls with Rett syndrome can live at least into middle age. Researchers are studying women with the disease, which was only widely recognized in the last 20 years.