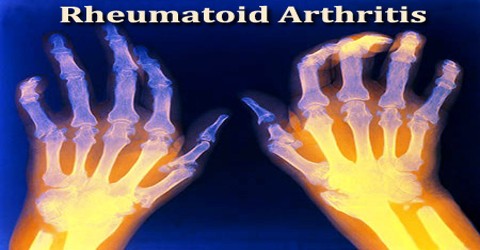 Rheumatoid Arthritis (or RA) is an autoimmune disease where the body attacks the lining tissue of joints, causing chronic joint inflammation. While it primarily affects joints, it can also cause inflammation of organs, such as the lungs, eyes, skin, and heart.

Rheumatoid Arthritis (RA) most commonly affects the joints of the hands, feet, wrists, elbows, knees and ankles. The joint effect is usually symmetrical. That means if one knee or hand if affected, usually the other one is, too. Because RA also can affect body systems, such as the cardiovascular or respiratory systems, it is called a systemic disease. Systemic means “entire body.” While the cause of rheumatoid arthritis is not clear, it is believed to involve a combination of genetic and environmental factors. The underlying mechanism involves the body’s immune system attacking the joints. This results in inflammation and thickening of the joint capsule. It also affects the underlying bone and cartilage. The diagnosis is made mostly on the basis of a person’s signs and symptoms. X-rays and laboratory testing may support a diagnosis or exclude other diseases with similar symptoms. Other diseases that may present similarly include systemic lupus erythematosus, psoriatic arthritis, and fibromyalgia among others.

The first recognized description of Rheumatoid Arthritis (RA) was made in 1800 by Dr. Augustin Jacob Landré-Beauvais (1772–1840) of Paris. The term rheumatoid arthritis is based on the Greek for watery and inflamed joints. It affects about 24.5 million people as of 2015. This is between 0.5 and 1% of adults in the developed world with 5 and 50 per 100,000 people newly developing the condition each year. Onset is most frequent during middle age and women are affected 2.5 times as frequently as men. In 2013, it resulted in 38,000 deaths up from 28,000 deaths in 1990. The cause of Rheumatoid Arthritis (RA) is not yet fully understood, although doctors do know that an abnormal response of the immune system plays a leading role in the inflammation and joint damage that occurs. No one knows for sure why the immune system goes awry, but there is scientific evidence that genes, hormones and environmental factors are involved.

Signs and Symptoms of Rheumatoid Arthritis (RA) may include:

As the disease progresses, symptoms often spread to the wrists, knees, ankles, elbows, hips and shoulders. In most cases, symptoms occur in the same joints on both sides of our body.

About 40 percent of the people who have rheumatoid arthritis also experience signs and symptoms that don’t involve the joints. Its signs and symptoms may vary in severity and may even come and go. Periods of increased disease activity, called flares, alternate with periods of relative remission, when the swelling and pain fade or disappear. Over time, rheumatoid arthritis can cause joints to deform and shift out of place.

The symptoms and effects of RA may come and go. A period of high disease activity increases in inflammation and other symptoms is called a flare. A flare can last for days or months. Rheumatoid arthritis can be difficult to diagnose in its early stages because the early signs and symptoms mimic those of many other diseases. There is no one blood test or physical finding to confirm the diagnosis. To make a proper diagnosis, the rheumatologist will ask questions about personal and family medical history perform a physical exam and order diagnostic tests.

The doctor will examine each joint, looking for tenderness, swelling, warmth and painful or limited movement. The number and pattern of joints affected can also indicate RA.

The blood tests will measure inflammation levels and look for biomarkers such as antibodies (blood proteins) linked with RA.

An X-ray, ultrasound or magnetic resonance imaging scan may be done to look for joint damage, such as erosions – a loss of bone within the joint – and narrowing of joint space. But if the imagings tests don’t show joint damage that doesn’t rule out RA. It may mean that the disease is in an early stage and hasn’t yet damaged the joints.

There is no cure for rheumatoid arthritis. But recent discoveries indicate that remission of symptoms is more likely when treatment begins early with strong medications known as disease-modifying antirheumatic drugs (DMARDs).

Medications for Rheumatoid Arthritis (RA) – There are different drugs used in the treatment of rheumatoid arthritis. Some are used primarily to ease the symptoms of RA; others are used to slow or stop the course of the disease and to inhibit structural damage.

If medications fail to prevent or slow joint damage, patient and doctor may consider surgery to repair damaged joints. Surgery may help restore patient’s ability to use their joint. It can also reduce pain and correct deformities.

Some common complementary and alternative treatments that have shown promise for rheumatoid arthritis include: Fish oil, Plant oils and Tai chi.