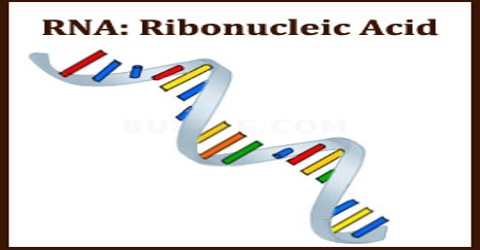 Ribonucleic Acid or RNA is an important molecule with long chains of nucleotides. A nucleotide contains a nitrogenous base, a ribose sugar, and a phosphate. Just like DNA, RNA is vital for living beings. RNA is one of the three major biological macromolecules that are essential for all known forms of life (along with DNA and proteins). A central tenet of molecular biology states that the flow of genetic information in a cell is from DNA through RNA to proteins: “DNA makes RNA makes protein”. Like DNA, RNA is assembled as a chain of nucleotides, but unlike DNA it is more often found in nature as a single-strand folded onto itself, rather than a paired double-strand. RNA expands the quantity of a given protein that can be made at one time from one given gene, and it provides an important control point for regulating when and how much protein gets made. There are several classes of RNA molecules. They play crucial roles in protein synthesis and other cell activities:

Messenger RNA (mRNA) is a type of RNA that reflects the exact nucleoside sequence of the genetically active DNA. mRNA carries the “message” of the DNA to the cytoplasm of cells where protein is made in amino acid sequences specified by the mRNA.

Ribosomal RNA (rRNA) is a component of ribosomes. Ribosomal RNA functions as a nonspecific site for making polypeptides. DNA is defined as a nucleic acid that contains the genetic instructions used in the development and functioning of all known living organisms. RNA molecules are involved in protein synthesis and sometimes in the transmission of genetic information.

However unlike DNA, RNA comes in a variety of shapes and types. While DNA looks like a double helix and a twisted ladder, RNA may be of more than one type. RNA is usually single-stranded, while DNA is usually double-stranded. In addition, RNA contains ribose while DNA contains deoxyribose. Deoxyribose lacks one oxygen atom. RNA has the bases Adenine (A), Uracil (U) (instead of thymine in DNA), Cytosine (C) and Guanine (G).

The helix geometry of DNA is of B Form. DNA can be damaged by exposure to Ultraviolet rays. The helix geometry of RNA is of A-Form. RNA strands are continually made, broken down and reused. RNA, however, is more resistant to damage by Ultra-violet rays. The complementary base to adenine in DNA is thymine, whereas in RNA, it is uracil, which is an unmethylated form of thymine. The main job of RNA is to transfer the genetic code need for the creation of proteins from the nucleus to the ribosome. This process prevents the DNA from having to leave the nucleus. This keeps the DNA and genetic code protected from damage. Without RNA, proteins could never be made. RNA is formed from DNA by a process called transcription. This uses enzymes like RNA polymerases. RNA is central to protein synthesis. First a type of RNA called messenger RNA (mRNA) carries information from DNA to structures called ribosomes. These ribosomes are made from proteins and ribosomal RNAs (rRNAs). These all come together and form a complex that can read messenger RNAs and translate the information they carry into proteins. This requires the help of transfer RNA or tRNA.

Transfer-messenger RNA (tmRNA) is found in many bacteria and plastids. It tags proteins encoded by mRNAs that lack stop codons for degradation and prevents the ribosome from stalling. RNA is synthesized from DNA by an enzyme known as RNA polymerase during a process called transcription. The new RNA sequences are complementary to their DNA template, rather than being identical copies of the template. RNA is then translated into proteins by structures called ribosomes.

Primary transcript RNAs are often modified by enzymes after transcription. For example, a poly(A) tail and a 5′ cap are added to eukaryotic pre-mRNA and introns are removed by the spliceosome. There are also a number of RNA-dependent RNA polymerases that use RNA as their template for synthesis of a new strand of RNA. For instance, a number of RNA viruses (such as poliovirus) use this type of enzyme to replicate their genetic material. Also, RNA-dependent RNA polymerase is part of the RNA interference pathway in many organisms.