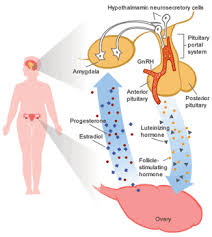 Role of Hormone in Insect Control

The Hormones are secreted by the endocrine glands travel towards the side of their action (the target organ) through the medium of blood.

The objectives of Hormone as insecticide used in pest control-

When the high dose of ecdysone is injected or topically applied, the insects die soon due to its toxic effect or they may undergo abnormal moulting. Hyperecdysonism as found in various insect, silkworms, Tenebrio etc.

About 40 different steroids have been isolated from the higher plants showing a-and p-ecdysone activity and are called phytoecdysones. The plant sex hormone, antheridiol is a steroid and resembles. A. number of phytoecdysones and may provide defence to the plants from the insects.

A topical application of ecdysoids often kills an insect. The killing is brought about either by formation of defective cuticle or juvenilising effects. In normal development ecdysone, is released in low concentration at precisely controlled rates. But when the insects are artificially exposed to large amounts of hormones, the developmental processes are accelerated bypassing some of the normal events. For example, the epidermal cells may hastily secrete a new cuticle before all the cell divisions necessary for scale formation have been completed, with the result the integu­ment may lack scales or the uppermost wax layer.

In either case, the insect will die of lack of protection and of desiccation. Again, in normal development with low hormone concentration, the DNA (genetic material), slowly and gradually, reorganises (reprogrammes) its genes to produce the cuticle of the next stage, say larval to pupal or pupal to adult. But under the influence of a high concentration of hormone (ecdysoid), the DNA does not get time enough to do so and it continues to secrete the cuticle of the same (larval) stage thereby keeping the insect in a juvei condition which cannot last long and the insect will die. These eifects are obviously due to an excess of hormone (ecdysone) and, have therefore, been termed “hyperhormonism” or “hyperecdysonism”. The above effects render ecdysoids as suitable insecticides. They penetrate the cuticle of most insects and so can be applied topically in various solvents. Some of them are effective when fed (stomach poisons) and some of them can be synergised by mixing with piperonyl butoxide like the conventional insecticides. Chemists are trying to synthesise conjuga­ted ecdysones that the insects cannot degrade by their detoxifying enzymes and also volatile ecdysoids that can be used as fumigants.

Long Back Carroll Williams (1956) wrote. “It seems likely that the Juvenile hormones when identified and synthesized, will prove to be an effective insecticide”. JH directly on the target cells without requiring the mediation of any specialized organ. JH readily the cuticle of insects.

Juvenoids are by far the most promising of the hormonal insecticides. They can kill the insects in several ways some of which are of by the antimetamorphic effect ; by the larvicidal effect; by the ovicidal effect , (iv) by the diapause disrupting effect ; and (v) by the embryogenesis inhibiting effect.

By the antimetamorphic effect, the juvenoids retain status quo i.e., do not allow metamorphosis to take place thereby forcing the larva to continue as a larva. Therefore, if the juvenoids are provided exogenously the larva will either undergo an extra larval moult (change into a superlarva) or moult into defective intermediate forms (see above) which may suffer from a failure to successfully moult, feed or mate. In every case, the juvenilised insects will perish. However, these effects are not due to hyperhormonism unlike ecdy­soids but are dire to the presence of the hormone (juvenoid) at a wrong time when it is supposed to be absent or present only in minute quantities.

Many juvenoids have been found to be efficient larvicidal compounds. For instance, a compound identified as altosid and later given the commercial name, methoprene, has been registered in the USA and some other countries to kill the larvae of many noxious insects like mosquitoes. When added to ponds and pools, the compound produces derangements in the larval development, thereby killing the larvae and thus preventing the formation of adult mosquitoes. If mixed with the cattle feed, this compound has been found to inhibit the development of the manure breeding flies. Human fleas spread many diseases and have shown a rapid develop­ment of resistance to the conventional insecticides. Even though the adult fleas are not affected, the larvae which breed in detritus, in homes and animal habitations are easily destroyed by methoprene. Methoprene has been found to be very effective in the control ot the larvae of the hornfty, (Haematobia irritans), stored tobacco pests-(Coleoptera and Lepidoptera), greenhouse homopterans, Pharaoh ants (Manomorium pharaonsis) and the leaf-mining flies (Agromy-zidae) of vegetables and flower crops. Japanese workers found ‘manta’ (a methoprene compound) to prolong the mstar duration ot the last larval instar of Bombyx mori by 1-2 days so that the larvae could make larger cocoons yielding 10-20 per cent more silk. This discovery is being exploited by several silk-producing countries including Japan.

In the adults, the JH, as we know, is needed for the ovarian maturation. But for this, it is needed only in small amounts. A. large exogenous dose of juvenoid given to adult females renders their eggs inviable (sterile). This is an ovicidal effect which amounts to chemosterilisation but with the difference that whereas egg pro­duction continues in .the former, in the latter it stops. Such a senility could also be induced in the female if it is allowed to mate wim a juvenoid-treated male, the hormone reaching the female through male contact.

Diapause, which most insects undergo at one stage or the other of their life-cycles, is an important mechanism in insects for survival during periods of climatic stress such as winter and drougni. Juvenoids could be employed to disallow this adaptive advantage in two ways : they could terminate pupal diapause by activating the inactive PTG of a diapausing pupa or if applied to the last instar larva, they could prevent the pupa from entering into diapause. In either case, the insect will be exposed to the extremes ot the climate and will die.

Embryogenesis is another event with which the juvenoids inter­fere. If the hormone is applied to the eggs, the embryos either tail to complete their development or if they develop and hatch, the hormone may persist to manifest its effect at a later-tage, namely, the last larval instar may fail to metamorphose into an adult (anti-metamorphic effect.

The insect hormones are produced in very minute quantities, and, therefore, they cannot be of. any practical use. They are, therefore, chemically characterised and their analogues sy_nthesised. Sometimes, the chemical structure of the analogues is slightly altered to magnify their effects. The synthetic analogues “of ecdysone are called ecdysoids and’ of JH, juvenoids. In the paragraphs that follow, we shall examine the possibility of employing these analogues as insecticide.