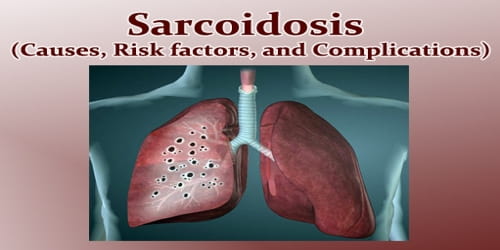 Definition: Sarcoidosis is an inflammatory disease that is the growth of tiny collections of inflammatory cells (granulomas) in different parts of our body, most commonly the lungs, lymph nodes, eyes, and skin. Any organ, however, can be affected. This causes organ inflammation. Sarcoidosis may be triggered by our body’s immune system responding to foreign substances, such as viruses, bacteria, or chemicals.

The signs and symptoms depend on the organ involved. Often there are no, or only mild, symptoms. When it affects the lungs there may be wheezing, coughing, shortness of breath, or chest pain. Some may have Löfgren syndrome in which there is fever, large lymph nodes, arthritis, and a rash known as erythema nodosum.

The cause of sarcoidosis is unknown. The disease can appear suddenly and disappear. Or it can develop gradually and go on to produce symptoms that come and go, sometimes for a lifetime.

There is no cure for sarcoidosis, but most people do very well with little or only modest treatment. In half of the cases, sarcoidosis goes away on its own. In a few cases, however, sarcoidosis may last for years and may cause organ damage. Causes and Risk factors of Sarcoidosis: The exact cause of sarcoidosis is unknown. Some people appear to have a genetic predisposition to develop the disease, which may be triggered by bacteria, viruses, dust or chemicals. There are no known predisposing risk factors for developing sarcoidosis.

The immune system is complex. Basically, B lymphocytes make antibodies to fight against infections, while T-lymphocytes patrol the tissues to fight off invaders in other ways.

Association of autoimmune disorders has been frequently observed. The exact mechanism of this relation is not known, but some evidence supports the hypothesis that this is a consequence of Th1 lymphokine prevalence. Tests of delayed cutaneous hypersensitivity have been used to measure progression.

Sarcoidosis rarely occurs in children. Symptoms usually appear in people between the ages of 20 and 40.

While anyone can develop sarcoidosis, factors that may increase people’s risk include:

Sarcoidosis was first identified over 100 years ago by two dermatologists working independently, Dr. Jonathan Hutchinson in England and Dr. Caesar Boeck in Norway. Sarcoidosis was originally called Hutchinson’s disease or Boeck’s disease. Dr. Boeck went on to fashion today’s name for the disease from the Greek words “sark” and “oid,” meaning flesh-like. The term describes the skin eruptions that are frequently caused by the illness.

Complications of Sarcoidosis: Most people who are diagnosed with sarcoidosis don’t experience complications. However, sarcoidosis can become a chronic, or long-term, condition.

Other potential complications may include: