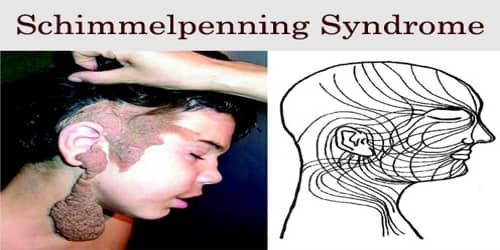 Definition: Schimmelpenning syndrome (SS) is a neurocutaneous disorder, which was related to epidermal nevus syndromes and characterized by craniofacial nevus, neurologic anomalies, and ocular pathology. Causes, Sign, and Symptom of Schimmelpenning Syndrome: The term “epidermal nevus syndrome” (Schimmelpenning syndrome) does not indicate 1 disease but rather a heterogeneous group of neurocutaneous disorders with a distinct genetic profile and a similar cutaneous phenotype. These conditions may differ from one another either by type and size of nevi or by distinctive clinical correlations.

It is hypothesized that the epidermal nevus syndromes are the result of genetic mosaicism involving a dominant gene. Epidermal nevi (as an isolated finding or a part of a syndrome) have been reported to occur in approximately 1 to 3 per 1,000 live births.

SS represents the best definition for a craniofacial sebaceous nevus associated with difficult seizures, mental retardation, and ocular lesions, such as coloboma or epibulbar lipodermoid; skull deformity is usually present. Cerebral manifestations include developmental anomalies, vascular lesions, tumors, and tumorlike conditions, which are all generally ipsilateral to the nevi.

Since the original identification of Schimmelpenning syndrome, the number of findings has expanded to the point that the syndrome is associated with a considerable constellation of abnormalities. The abnormalities may occur in a variety of combinations, and need not include all three aspects of the classic triad of sebaceous nevus, seizures, and mental retardation. In 1998, a literature review by van de Warrenburg et al. found:

The major neurological abnormalities include mental retardation to a varying extent, seizures, and hemiparesis. Seizures, when present, typically begin during the first year of life. The most common structural central nervous system abnormalities in Schimmelpenning syndrome are hemimegalencephaly and ipselateral gyral malformations.

Diagnosis and Treatment of Schimmelpenning Syndrome: The pathogenesis and clinical expression of Schimmelpenning syndrome (SS) and correlate syndromes are based on genomic mosaicism, in which ≥2 genotypical different clones of the same specific cell line coexist in a single individual.

Due to the potential for multisystem organ involvement, all children with a suspected diagnosis of LNSS should undergo a multisystem evaluation with imaging studies (CT or if possible MRI scanning of the brain), electroencephalogram in case of epilepsy, analysis of skin biopsies and ophthalmic investigation.

In general, children with a small isolated nevus and a normal physical exam do not need further testing; treatment may include potential surgical removal of the nevus. Care should be multidisciplinary including mainly orthopedic and ophthalmic follow-up. Brain imaging studies should be performed when clinically indicated.

Depending on the systems involved, an individual with Schimmelpenning syndrome may need to see an interdisciplinary team of specialists: dermatologist, neurologist, ophthalmologist, orthopedic surgeon, oral surgeon, plastic surgeon, psychologist.

The prognosis depends on the severity of the clinical manifestations and the extent of the multisystem involvement.