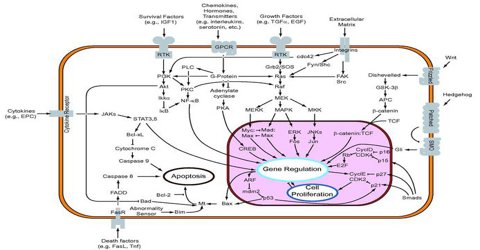 Signal Transduction in the Nervous System

Signal Transduction in the Nervous System

Signal Transduction is a basic process in molecular cell biology involving the conversion of a signal from outside the cell to a functional change within the cell. A neuron can have thousands of such special gaps or synapses with other neurons. These gaps or synapses are bridged by chemicals known as neurotransmitters. These are chemicals that are synthesized in the neurons, stored in synaptic vesicles, released in the synapses; transfer the information by binding to its receptors in the other neuron to start a cascade of events leading to a specific response. In the 1950s, Carlsson used a variety of animal models, including mice and rats, to identify dopamine as an important neurotransmitter. He showed that dopamine was involved in the nerve signals responsible for movement, and that dopamine dysfunction could result in serious disorders such as Parkinson’s disease. Carlsson has since worked on the development of drugs that influence neurotransmitters to treat Parkinson’s, depression and psychosis.

In the 1960s, Paul Greengard used animal models to investigate the mechanism of action of dopamine and other neurotransmitters. He found that during slow synaptic transmission, neurotransmitters bind to receptors in the surface of nerve cells, causing a cascade of chemical reactions that change the function of important proteins, sending a message from one nerve cell to another. These findings have increased our understanding of certain drugs that take effect by influencing the communication between nerve cells.

From the 1960s onwards, Eric Kandel primarily used sea slugs to study the role of synaptic transmission in learning and memory. Using this simple organism Kandel made discoveries that proved applicable to complex mammalian nervous systems. He found that the basis for learning and memory lay in the synapse, with weak stimuli leading to chemical changes in synaptic proteins that form short term memories. Stronger stimuli could affect the synthesis of new proteins and change the shape and function of synapses, resulting in long term memories. Kandel’s work marks an important point on our road to understanding how memories are made, and has informed many investigations into memory-improving treatments for dementia sufferers.

Carlsson, Greengard and Kandel received the Nobel Prize in Medicine or Physiology in 2000 for their discoveries concerning the signal transduction in nervous system. The discovery regarding signal transduction in nervous system triggered a lot of researches that led to an understanding of the mechanisms involved in several neurological disorders and consequently helped in the development of new drugs and therapies for the treatment of these disorders. Researches targeting the cure of Parkinson’s disease and the loss of learning or memory are main results of this discovery. So far, there is no absolute cure for these diseases and any progress made in this area is a significant step forward towards the amelioration of human sufferings due to these neurological disorders.

Hopefully, future researches in this area lead to the development of new drugs and therapies that can serve as permanent and absolute cure for these diseases.