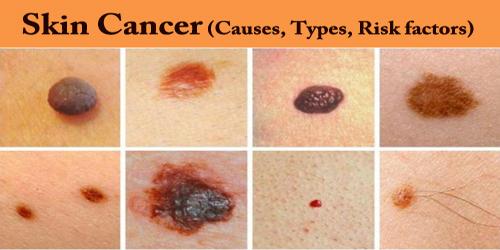 Skin Cancer is the out-of-control growth of abnormal cells in the epidermis, the outermost skin layer, caused by unrepaired DNA damage that triggers mutations. These mutations lead the skin cells to multiply rapidly and form malignant tumors. It can usually be cured, but the disease is a major health concern because it affects so many people. About half of fair-skinned people who live to age 65 will have at least one skin cancer. Most can be prevented by protecting your skin from the sun and ultraviolet rays.

Most skin cancers are locally destructive cancerous (malignant) growth of the skin. They originate from the cells of the epidermis, the superficial layer of the skin. Unlike cutaneous malignant melanoma, the vast majority of these sorts of skin cancers rarely spread to other parts of the body (metastasize) and become life-threatening.

People can reduce their risk of skin cancer by limiting or avoiding exposure to ultraviolet (UV) radiation. Checking their skin for suspicious changes can help detect skin cancer at its earliest stages. Early detection of skin cancer gives them the greatest chance for successful skin cancer treatment.

There are three major types of skin cancer: (1) basal cell carcinoma (the most common), (2) squamous cell carcinoma (the second most common), which originate from skin cells, and (3) melanoma, which originates from the pigment-producing skin cells (melanocytes) but is less common, though more dangerous, than the first two varieties. Other rare forms of skin cancer include lymphomas, Merkel cell cancers, and cancers of other tissue in the skin, including sarcomas as well as hair and sweat gland tumors. In this article, we will only be reviewing the most common forms of cancers, basal cell carcinoma and squamous cell carcinoma.

Basal Cell Carcinoma – Basal cell carcinomas (BCCs) are abnormal, uncontrolled growths that arise from the skin’s basal cells in the outermost layer of skin (epidermis). These cancers most often develop on skin areas typically exposed to the sun, especially the face, ears, neck, scalp, shoulders and back. Most BCCs are caused by the combination of intermittent, intense exposure and cumulative, long-term exposure to UV radiation from the sun. BCC is the most common form of skin cancer, with more than 4 million cases diagnosed in the United States each year.

There are several different types of basal cell carcinoma, including the superficial type, the least worrisome variety; the nodular type, the most common; and the morpheaform, the most challenging to treat because the tumors often grow into the surrounding tissue (infiltrate) without a well-defined border. BCCs can be locally destructive if not detected and treated early. Occasionally these cancers metastasize (spread), and in very rare instances they can be fatal.

Squamous Cell Carcinoma – Squamous cell carcinoma (SCC) accounts for about 20% of all skin cancers but is more common in immunosuppressed people. In most instances, its biologic behavior is much like basal cell carcinoma with a small but significant chance of distant spread. SCC is an uncontrolled growth of abnormal cells arising from the squamous cells in the outmost layer of skin (epidermis). SCCs are common on sun-exposed areas such as the ears, face, scalp, neck and hands, where the skin often reveals signs of sun damage, including wrinkles and age spots. Cumulative, long-term exposure to UV radiation from the sun and tanning beds causes most SCCs. SCC is the second most common form of skin cancer.

Melanoma – Melanoma is a cancer that develops from melanocytes, the skin cells that produce melanin pigment, which gives skin its color. Melanomas often resemble moles and sometimes may arise from them. They can be found on any area of the body, even in areas that are not typically exposed to the sun. It is often triggered by the kind of intense, intermittent sun exposure that leads to sunburn. Tanning bed use also increases risk for melanoma. Melanoma is the most dangerous of the three most common forms of skin cancer. Melanomas can be curable when caught and treated early. In 2019, melanoma is projected to cause about 7,200 deaths.

Spending too much time in the sun is the main cause of skin cancer. Sunlight has ultraviolet (UV) rays that can change the DNA in skin cells in ways that lead to cancer. Sunlamps, tanning booths, and X-rays also make these UV rays that damage skin.

Basal cell carcinoma and squamous cell carcinoma have been linked to ongoing sun exposure, typically in fair-skinned people who spend a lot of time outside. Melanoma has been linked with blistering sunburns; just one during childhood seems to double your risk for melanoma later in life.

Factors that may increase your risk of skin cancer include:

The good news is that if skin cancer is caught early, our dermatologist can treat it with little or no scarring and high odds of eliminating it entirely. Often, the doctor may even detect the growth at a precancerous stage, before it has become a full-blown skin cancer or penetrated below the surface of the skin.